2AM album nabs No. 1 spot on Singapore music chart 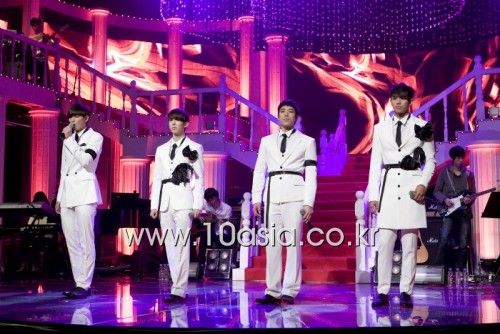 Korean idol group 2AM's first full-length album "Saint O'clock" has taken the No.1 spot on a weekly chart in Singapore for two weeks.

Big Hit Entertainment, 2AM's producer and promoter, announced in its press release on Wednesday that the album has been taking the lead on the weekly K-POP/J-POP chart of global record retailer HMV in Singapore from November 14 to 27, as well as the top spot on the same chart for major record store CD-RAMA.

The latest feat proves once again that they boys have taken off to a strong start in expanding their singing career into Asia -- in Taiwan, their album topped the weekly K-J POP section of the prestigious G-Music Chart as of November 18.

The album has also been doing well in Korea as well with its title track "You Wouldn't Answer My Calls" taking the top slots of numerous major music charts for several weeks straight.

2AM expressed their gratitude and anticipation for meeting their fans in Singapore as the group is scheduled to fly there later today to promote their album.

The group will spend the rest of the week there to hold a fan meeting on December 2 and participate in the Mnet Ultimate Live In Asia (MULA) show on December 4 before returning to Korea on Sunday.

They will then start preparing for their nationwide tour which will go on for two months starting December 24.

2AM, composed of members Jo Kwon, Jeong Jinwoon, Im Seulong and Lee Changmin, debuted in 2008 with single "This Song" which topped Korea's music charts immediately following its release on November 12.

They are known for their hit ballads including "Can't Let You Go Even If I Die" and "I Did Wrong" as well as having branched out into various facets of the entertainment industry such as hosting radio shows and appearing on variety programs.

"2AM album nabs No. 1 spot on Singapore music chart "
by HanCinema is licensed under a Creative Commons Attribution-Share Alike 3.0 Unported License.
Based on a work from this source