2AM to Be Featured on the Official 2010 World Cup Album 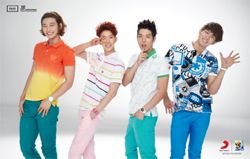 Sony Music Entertainment announced on May 11th that after reviewing a number of Asian singers and groups, they decided to select 2AM as Asia's representative artist to feature on the official album for the 2010 World Cup to be held in South Africa. The album will be titled "Listen Up! The Official 2010 FIFA World Cup Album" and will feature other big international names such as Shakira, R. Kelly, Pitbull, and John Legend. It will be released on May 31st worldwide, including ten Asian countries such as China, Hong Kong, and Thailand.?

The song that the boys will be singing is titled "No. 1" and was written by songwriter Bang Shi-hyeok, who is also the same mastermind behind the group's previous hits "Rather Die Than Let You Go" and "I Was Wrong".