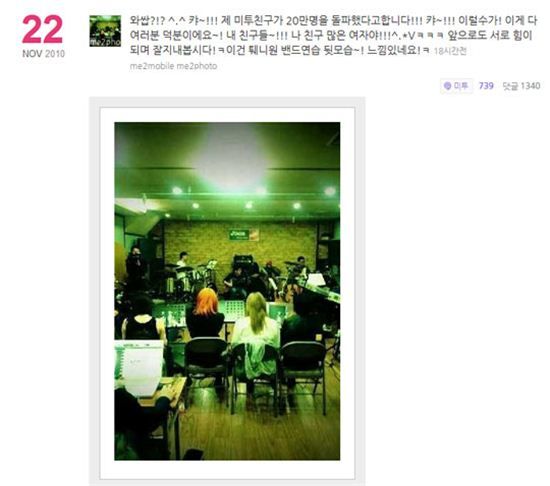 Korean girl group 2NE1 member Sandara Park said on her official me2day site (Korean version of Twitter) that she has 200,000 friends, the largest number of followers for a celebrity.

The K-pop idol posted a photograph of 2NE1's band practicing with a comment below saying, "Wow! I just reached 200,000 friends on my me2day account -- all thanks to you. I am a girl with many friends!! Let's work hard to get along in the future".

Fans who have seen the post left responses saying, "I am one of the 200,000 friends", "Congratulations! You are the queen of me2today" and "I am glad to be one of Sandara's friends".

Sandara first opened her official me2day site last June and since has uploaded one posting a day on her account to update fans on her daily life such as photographs from televised music shows as well as revealing a photo of YG Entertainment founder and CEO Yang Hyun-suk' daughter.

Composed also of members CL, Bom and Minzy, 2NE1 has been one of the most popular girl groups in the country since their debut in May 2008.

They have enjoyed a successful return to the local music scene with their first full-length album "To Anyone", topping numerous music charts with title tracks "Go Away", "Clap Your Hands" and "Can't Nobody" which they promoted simultaneously after its release in early September.

They recently finished promoting follow-up R&B track "I'm Hurt" and will be attending the 2010 Mnet Asian Music Awards in Macau on November 28.

"2NE1 member Sandara has 200,000 friends "
by HanCinema is licensed under a Creative Commons Attribution-Share Alike 3.0 Unported License.
Based on a work from this source