2NE1 Safe In Japan After Earthquake 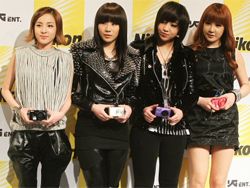 News of girl group 2NE1's safety was reported as they were in Japan when the mega-earthquake of 8.8 struck.

The girls' entertainment agency YG Entertainment said, "We were initially worried because we couldn't get in contact with the girls and the staff. However, we received notice that they're safe". The singers were staying in Japan, prepping for their debut there on the 11th with their single "Go Away".

The group was originally supposed to feature on the show "Music Station" on Asahi TV for their first debut performance and leave Japan on the 12th. However, the performance date has been postponed and their departure date will most likely be pushed back too considering the current status of the airport.

YG also added that the hotel the girls are currently staying at is one of the best earthquake-resistant buildings in Japan. Despite the fact that it is a shame their debut has been pushed back, the company emphasized the greater importance of the girls' safety.