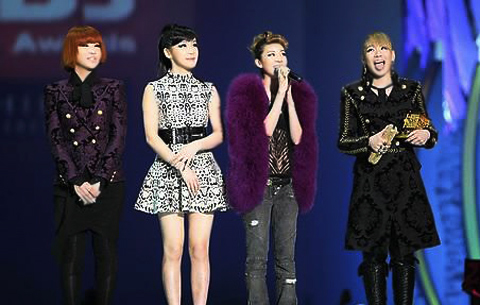 Girl group 2NE1 has been selected as a speaker who will introduce Hallyu to the world at Cannes in France. According to Cheil Communications on April 4, 2NE1 and the regional president of Cheil Worldwide South-East Asia, Kim Sung Jong, have been invited to the seminar on "Digital Hallyu Marketing" at the Cannes Lions Creativity Festival in June.

Cheil Communications revealed that 2NE1 has been selected as a speaker as they have contributed to the spread of Hallyu with their characteristic music and fashion style. The fact that their agency YG Entertainment has actively promoted digital Hallyu marketing has also been taken into account.

The Cannes Lions Creativity Festival, the world's largest advertising festival, began in 1953 and this year's festival will be the 59th event. The chairman of the London Olympic Organizing Committee, Sebastian Coe, Vice-Chairman of Nike, Trevor Edwards, and the producer of the American TV drama "Sex and the City", Michael Patrick King, will attend this year's festival.[Yonhap]

"2NE1 Selected as Speaker at Cannes Lions Creativity Festival"
by HanCinema is licensed under a Creative Commons Attribution-Share Alike 3.0 Unported License.
Based on a work from this source