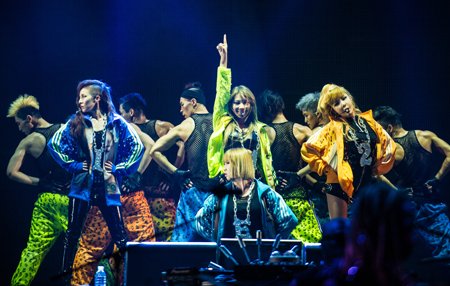 The K-pop girl group 2NE1 are often called Korea's TLC. In Sunday's concert, however, the four Korean girls showed not only can they match America's hottest female act of the '90s but even better them onstage.

They aptly began the show with the thrilling club-banger "I Am the Best", which the group sang again as the final encore of the two-hour set. And what came in between proved that bold claim.

Though they made their debut in the summer of 2009 as the "female Bigbang" their show was superior to their label-mates' performance earlier this year.

Seoul's Olympic Gymnastics Stadium, the city's largest indoor arena, was slightly below full capacity, with some of the most affordable seats empty but that did not deter 2NE1 from bringing their best.

The choreography, upgraded by one of the industry's best, Travis Payne, was flawless and their pipes were in top shape despite the intricate dance moves.

More often than not, the strength of their voices made pre-recorded tracks meaningless, at times even overpowering the back-up band. The level of energy, even on this second consecutive night, did not diminish at all until the end.

While all four were formidable, Minzy, the youngest of the group at 18, was the star on Sunday. She came close to stealing the show, with all eyes drawn to her movements and her voice the strongest of the night. If she was until now in the shadows of her older colleagues - she frequently keeps silence in interviews and other public appearances - this concert proved she is second to none.

Their biggest hits such as "Ugly" and "Go Away" may have been crowd-pleasers, yet there was much pleasure in rediscovering the smaller hits of the group that musical director Divinity Roxx and her band re-arranged for great impact.

The best of them was the free-wheeling duet between CL and Minzy "Please Don't Go", sung on a virtual rollercoaster.

The production was consistently excellent - even more creative than Lady Gaga's latest tour. There was always something happening: colorful lights, pyrotechnics, state-of-the-art video programming by Possible Productions, or all of them at once.

The only noticeable blunder was the wardrobe by Jeremy Scott. Many of the creations were neither forward-looking nor flattering. Some, especially the light-brown dresses that looked like recycled drapes and Bom's amoeba-patterned outfit during her solo segment, were plain ugly.

As the evening progressed, one could not help but be struck by the number of hits the girls have racked up in just three years - they sang 21 original songs.

For an audience so accustomed to their discography, however, it felt slightly cluttered.

Next time, at least for Korean spectators, they would be better advised to cut down on the number of tracks and give every segment the attention it deserves - with extensive re-arrangements and remixes. "I Love You", the latest single, is a masterpiece, and despite a slight remix still felt too short.

"2NE1 Global Tour: New Evolution" proceeds to the Prudential Center in Newark, N.J. and Los Angeles' Nokia Theater later this month, before they fly back across the Pacific for several dates in Osaka, Nagoya, Yokohama and Saitama, Japan. Other cities will be added in the near future, YG Entertainment said.