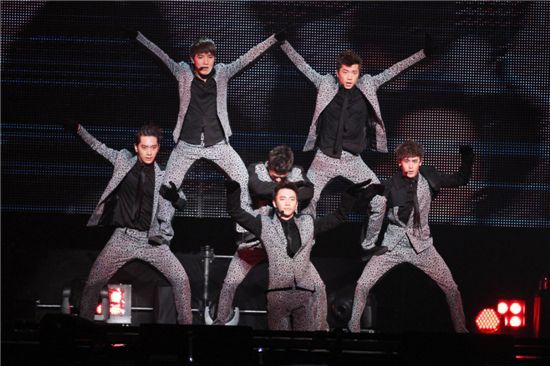 Six-member boy band 2PM debuted with a bang in Japan yesterday, attracting over 25,000 fans to their first showcase in the country, according to JYP Entertainment (JYPE) on Thursday.

At the event titled "2PM 1st Contact in Japan", held at Tokyo's Kokugikan, the group greeted their fans in Japanese and performed their hit numbers including "Don't Stop Can't Stop", "Again & again" and Heartbeat.

On a screen on stage, they also showed the promotional events they had carried out upon their arrival in Japan on December 6 including a press conference covered by some 100 media outlets, recordings on television and radio shows, as well as a visit to Sony Music Japan which will manage the boys' singing career in the country.

At the end of the showcase, 2PM revealed that the group plans to tour Japan under the name "Zepp Tour", holding concerts in Sapporo, Fukuoka, Osaka, Nagoya and Tokyo in May of next year.

"We were worried and nervous about debuting in Japan but thanks to the great support we've received from our fans we were able to gain confidence. Thank you so much and we promise to be well prepared for Zepp tour", 2PM group was quoted as saying in the press release.

Composed of members Nichkhun, Wooyoung, Lee Junho, Hwang Chan-sung, Junsu and Ok Taecyeon, 2PM has been one of the most popular boy bands in Korea since their debut in 2008. 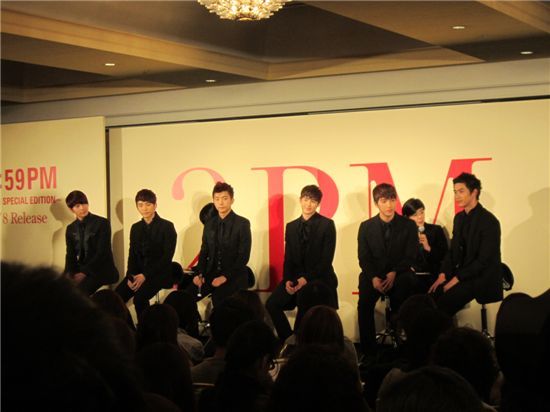 Boy group 2PM talks to media outlets at a press conference held ahead of their showcase in Tokyo, Japan. [JYP Entertainment]