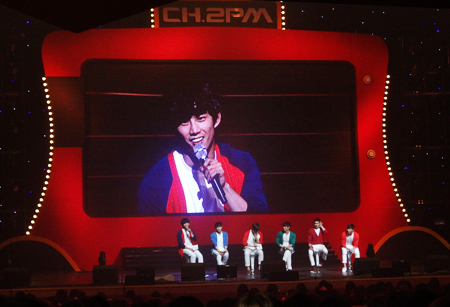 Members of K-pop boy band 2PM host a mock talk show at their fan-only gathering on Sunday, at the Grand Peace Palace of the Kyunghee University in Hoegi-dong, eastern Seoul. Ok Taecyeon, who did most of the speaking for the evening, is on screen./ Courtesy of JYP

Even with just about 4,000 in the Seoul auditorium, 2PM's fans could easily out-scream the crowds at world's largest music festivals like Glastonbury or Coachella.

Cheering and hollering the band members' names, the entirely female audience seemed unable to contain their excitement, fuming every emotion out in full force at every opportunity and leaving no part of their vocal chords unmoved.

The commotion was understandable, given that the group has been arguably the most popular boy band in the country with a streak of No. 1 hits since their 2008 debut.

But there was more to the occasion than just a massive group of pre-teen girls going gaga over the exceptional proximity to their idols, from the looks of the Sunday spectacle at the Grand Peace Palace in Kyunghee University, Hoegi-dong, eastern Seoul.

Termed "fan meeting", this integral part of K-pop serves as an exclusive channel for the registered official fan club members to not only see their favorite entertainers up close and personal but to also express their desires and wishes to the artists and the agencies behind them.

"I could see that the 2PM members had put in a lot of effort because they were looking forward to seeing their Korean fans", said a local fan in her 20s, giving her interpretation in an interview through Twitter and e-mail, adding that she had been to the previous fan meeting last year. 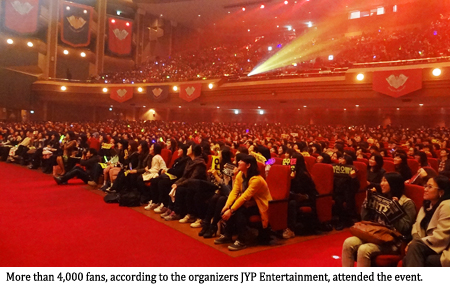 These days such evenings are a fundamental part of Korean entertainers' careers, making sure they please their core audience as much as possible. As the artists gain fame in uncharted territory, fans there also demand a similar level of attention, and this K-pop tradition continues to spill over.

"I could witness how precious the Korean fans were to 2PM", said a European fan attending for the first time. She asked for her name to be withheld from print.

The adoration, however, was never unconditional. When Ok Taecyeon, spokesman for the evening, jokingly asked fans to follow him into the military (for mandatory service), the female fans did not respond positively, some even saying "No", firmly.

The European interviewee was just as unafraid to voice her objections.

"For the fans that came from abroad but do not understand Korean, it could have been a bit difficult", she said, adding that she was an exception to this trend due to her previous learning of the language. "Also, it was a shame that they only sang five songs".

In fact, most of the 2.5-hour show was spent watching taped segments of parodies and other light comedies on the giant screen in the center of the stage that bore the title "CH. 2PM" on top. The members ― Junsu, Junho, Nickhun, Wooyoung and Chansung in addition to Ok Taecyeon ― also acted in short plays that showed off both their sex appeal and cuteness. Once they dressed up in animal costumes but teased with some staged romance between "monkeys", drawing wild cheers. Their signature acrobatic dance routines and chiseled bodies were reserved until the finale.

The immediate response from the audience seemed to embolden them, trying harder to bring out even louder rounds of applause.

Meanwhile, as the show was still in progress, Twitter was ablaze with instant review. Against a strict no-camera policy and risking immediate expulsion from the house, fans were uploading pictures and videos to the social networks live ― with their comments. Retweets spread like wildfire.

The fans looked exhilarated, happy to scream at whim, like worshippers at a gospel church. They were startled at times to see this reporter ― a foreign, male presence ― but they immediately went back to their house of mirth.

Psychologists say that these happy outbursts are emotional discharges from people usually prevented from doing so, but for the artists' point-of-view, these are the most reliable test group.

"I like 2PM because they are not god-like figures but boys you can run into on the street", said a Korean fan.

While that claim could be contested ― they are stars, after all, with make-up and bright costumes ― they will continue to be molded to fans' tastes. And K-pop thrives on this cozy relationship.