2PM ranks No.2 on Oricon chart 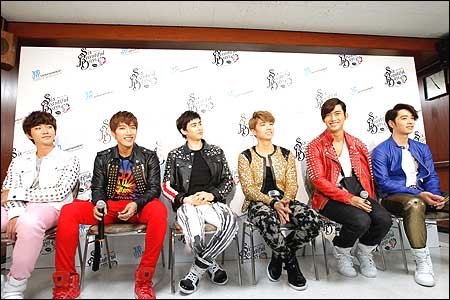 The members of Korean boy band 2PM pose at a press conference held in Budokan of Tokyo on May 30. Their fourth single "Beautiful" ranked second on Oricon daily chart.

Title track "Beautiful" was first introduced as the background music for a food advert in Japan. The single includes a song that 2PM member Lee Junho wrote.

The idol group plans to hold a "High Touch" event celebrating its fourth single, scheduled for June 9 in Osaka and June 16 in Tokyo. The group will also attend "MTV VMAJ (VIDEO MUSIC AWARDS JAPAN 2012)" with other famous Japanese artists and perform live.

2PM made its official debut in Japan in December 2010 with their first live event at the Ryogoku Kokugikan Gymnasium in the nation's capital, a place well known for sumo wrestling matches. They are also popular in other Asian markets including China, Thailand, Malaysia and the Philippines.