2PM releases digital single and music video for Thank You 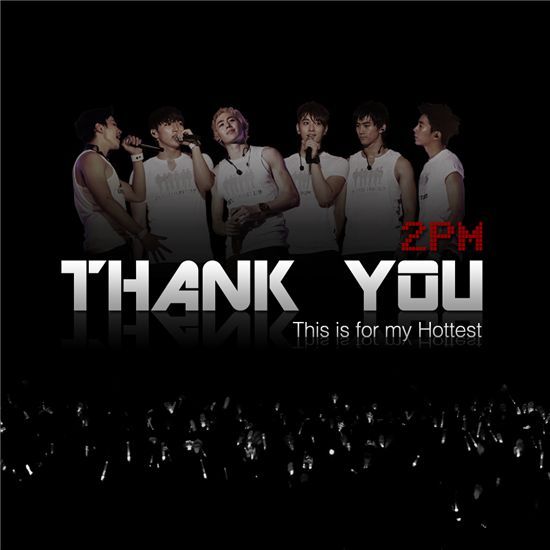 Korean idols 2PM have released a digital single and music video for "Thank You", according to the group's agency JYP Entertainment on Wednesday.

JYPE announced in a press release that the ballad song "Thank You", which was first revealed at 2PM's first solo concert, was revealed on various web-based music sites yesterday.

The song features a piano melody with lyrics thanking fans who have supported the group in the past while the music video contains various compilations of the group's previous performances and each member showing their love for their fans all over the world.

"'Thank You' is for the fans from the members of 2PM, expressing the words that they couldn't say and showing their love through the song", explained an official from JYPE.

2PM, composed of members Junsu, Lee Junho, Nichkhun, Ok Taecyeon, Wooyoung and Hwang Chan-sung, made their debut in 2008 with their album "Hottest Time of the Day". They are well-known for their hit songs "10 Out of 10", Heartbeat, "Tired of Waiting" and "Without U".

The group recently gave their first solo concert "Don't Stop Can't Stop" on July 31 and August 1 in Seoul and in Busan the following weekend. They will be giving an encore performance of their live show on September 4 and 5.