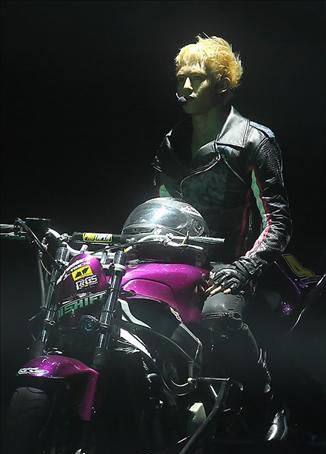 When the clock on the screen indicated 2 pm, wild and tough action scenes were played onscreen.

When the heavy booming sounds played enough to raise tension among the audience members, the concert hall was filled with the sound of motorcycle engines. The members of 2PM made an appearance on the stage by riding motorcycles, and they showcased their first song "Don't Stop Can't Stop" with a dynamic dance performance.

For 2PM's first concert entitled "Don't Stop Can't Stop", which was held at Seoul Olympic Gymnastics Hall on July 31, members of 2PM presented a strong opening performance, strong enough to validate their nickname "beast idol". More than 12,000 audience members, not only from Korea but also from other countries such as Japan, China, Thailand, and Taiwan, participated in the concert where 2PM members showcased every one of their hit songs since their debut in 2008. In addition, members showcased various performances during the concert including individual members' solo performances, parodies of girl groups, and a trot medley. Members performed while running across the square-shaped stage, which surrounded the audience members, and made the audience become enthusiastic by presenting their various performances and attractive charms.

On the stage where lightning flashed and rain poured, 2PM sang the song "Without U" with heartfelt emotion and the song "Only You" with sweet voices while throwing roses to audience members. In addition, they presented comical and cheerful performances by singing trot singer Park Hyun Bin's song "Shabang Shabang" and Park Sang Chul's "Unconditionally" while wearing glittering clothes.

In particular, every member's solo performance was focused on showing each member's brand new image. Nichkhun played a guitar and sang the song "More Than Words", and Ok Ok Taecyeon invited one of the fans from the audience to the stage and sang the song "An Essay of Memory" while playing the piano and drew a favorable response from the crowd for his acoustic serenade. But, 2PM soon returned to its original image of "beast idol" in the end. With the sound of motorcycle engines and flames on the stage, the group's hit song "Heart Beat" began and the members showcased their hit song.

During the concert, group members delivered messages to the fans, saying, "Dear fans, we know that you had gone through hard times, but we also had to overcome hardships, which was possible thanks to you. You gave us energy to endure the hard times". Their message seemed to hint at the distress caused by Jae Bum withdrawing from the group.

Members of 2PM sang the song "Thank you", which was composed for fans, for the first time and expressed their feelings by saying, "We were worried because we were going to have our first concert in this big Olympic Gymnastics Hall. We really appreciate your support, which has been the source of energy for us. Today, we were really touched by your cheering. We love you, all of our fans".

Other singers such as Girls' Generation, Tiger JK and his wife Yoon Mi-rae, and the group 2AM, which had performed in the concert as the opening guest singer, watched the concert as audience members. 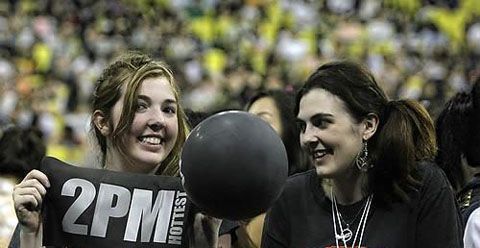 "2PM's First Concert Wows 12,000 Audience Members"
by HanCinema is licensed under a Creative Commons Attribution-Share Alike 3.0 Unported License.
Based on a work from this source