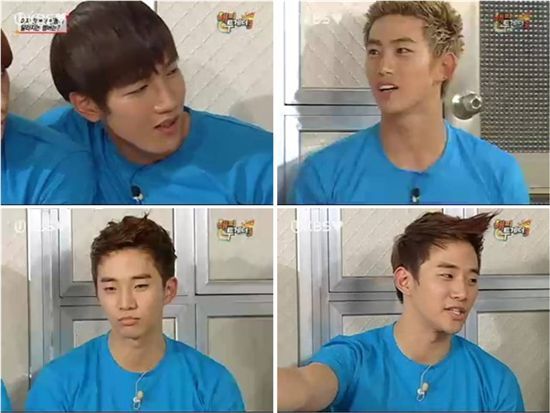 Members of popular boy band 2PM have revealed that Ok Taecyeon acts the most different when he is around girls.

During their guest appearance on KBS2's variety show "Happy Together Season 3" on Thursday night which is hosted by comedians Yoo Jae-suk and Park Myung-soo, the members said that Ok Taecyeon acts the most different in front of the opposite sex.

"He becomes more cheerful in front of girls. There was this one time when girl group f(x) walked by and he emphasized the end of his sentance by raising the intonation to when he said 'Good job.'"

Ok Taecyeon embarrassingly admitted that he was just imitating one of f(x)'s songs but Wooyoung added, "When Ok Taecyeon is in front of girls, his reactions become bigger and so do his pupils".

Meanwhile, Lee Junho pointed out that Junsu is the same as well with Hwang Chan-sung explaining how Junsu uses his country dialect all the time but when he is in front of women, he tries to act smooth and changes the tone of his voice.

Six-member band 2PM who made their debut in 2008 is known for their powerful dance moves and numerous hit songs including "10 Out of 10", "Tired of Waiting", Heartbeat and "Again & Again".

They made a successful return to the local music scene with their mini-album "Still 2:00PM" and have been promoting title track "I'll Be Back", which has swept various online music charts and televised music shows since its release on October 11.