2PM To Debut in Japan by Releasing DVD 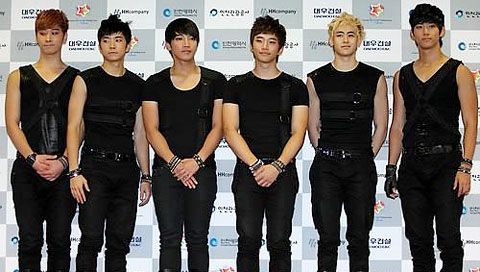 The Sankei Sports newspaper reported an article with the title "Asia's NO.1 Group 2PM to Debut in Japan" on September 22 and said that the six-member male group has decided to debut in Japan. 2PM will release its debut DVD entitled "Hottest-2PM 1st MUSIC VIDEO COLLECTION & The History", in which their seven hit songs and music videos are included, to present their various talents to Japanese fans on November 24. They will also hold a large-scale debut event in Ryogoku Kokugi-kan located in Tokyo on December 8 to interact with their fans.

In addition, 2PM's album entitled "01:59PM", which was officially released in Korea last year, will be released in Japan as a special edition on December 8 when the event to commemorate their debut in Japan will be held, and their official album in Japan is planned for release in spring next year.

Sankei continued that in the middle of the K-POP boom in Japan, more than ten big music record companies had scrambled to sign 2PM, and Ariola Japan, SONY Record-affiliate company, finally signed a contract with them for publication rights.

A person from Ariola Japan praised 2PM by saying, "2PM members have a good appearance as well as high quality music, singing ability, and unrivaled dance performances. So, it is not an exaggeration to say that there is no better music group than 2PM, which has every element to become a star group in the world music industry. In addition, I am attracted by their friendly image that can make people feel comfortable and become close to them very easily".

One of the members, Woo Young said, "I am very excited about our debut in Japan. I personally have an interest in Japanese culture, so I am anticipating it much more".

2PM had appeared on the Hallyu channel Mnet's popular music program entitled "K-POP ZONE", which had been filmed in Osaka in November, 2008, and their best performances had already fascinated Japanese fans at that time.

"2PM To Debut in Japan by Releasing DVD"
by HanCinema is licensed under a Creative Commons Attribution-Share Alike 3.0 Unported License.
Based on a work from this source