2PM to expand career into Japan 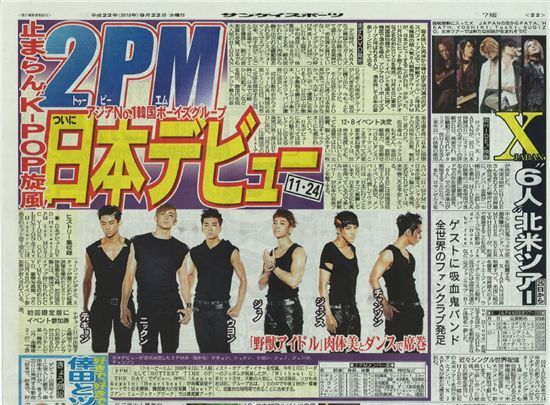 Top Korean boy band 2PM will be expanding their singing career into Japan in a few months, according to their agency JYP Entertainment (JYPE).

JYPE explained through a press release Thursday that as reported by Japanese media outlets the previous day, 2PM will make a debut in Japan through major record label Sony Music Entertainment in two months time.

"Sony Music and JYPE have decided to go forth with a rare system where both major labels will take part in managing 2PM's career in Japan for maximum synergy", JYPE explained through the statement.

JYPE also said that while Ariola Recods and Epic Records, major subsidiaries of Sony Music Entertainment, will simultaneously promote the band and release their records, JYPE itself has almost completed setting up an office in Japan which will support the activities of its artists in the country and its various businesses.

The release of a DVD titled "Hottest" on November 24 containing their music videos released to date, as well as pictorials and never-before-seen past footage, will mark 2PM's debut in Japan.

They will then hold a showcase named "2PM 1ST CONTACT IN JAPAN" on December 8 at The Kokugikan, a venue famous for holding sumo and martial arts tournaments. Their first full-length album "1:59 PM" will also go on sale the same day.

They had made headlines last year however, when Park quit the group after sparking national controversy over remarks he had written about Korea on his MySpace page as a trainee.

He was expected to make a comeback to the group a few months later but was ousted from JYPE in March this year after confessing a "huge personal wrongdoing".

The band has enjoyed a successful career throughout however, holding numerous hits under their belt including "10 Out of 10", "Again & Again", "Only You" and Heartbeat.