2PM to give encore concert 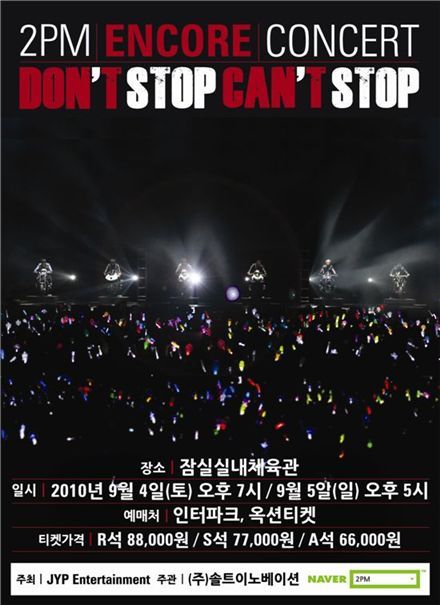 Korean idols 2PM will be giving an encore performance of their first live show in September, according to their agency JYP Entertainment on Monday.

In a press release, JYP announced that the boys will hold a second showing of their first solo concert "Don't Stop Can't Stop" on September 4 and 5.

Their first round of shows was held July 31 and August 1 at the Olympic Stadium in Seoul and on August 7 and 8 at the Busan Exhibition & Convention Center (BEXCO) in Busan.

JYPE reported that a total 38,000 fans turned up for the four shows including concertgoers not only from Korea but Japan, Taiwan, England, United States, Thailand and China as well.

"We want to thank the fans who have shown their interest in 2PM's concert. The encore performance will be upgraded from the first show", an official from JYPE was quoted as saying.

Originally a seven-member band headed by Jay Park, 2PM has settled as a six-man act after Park's departure from the group last September over the now-infamous "I hate Korea" comments he had posted on his MySpace pages during his teenage years as a trainee at JYPE.