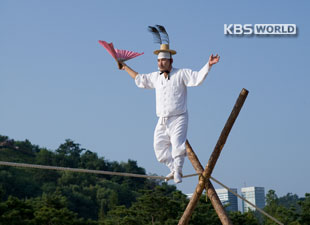 ANCHOR: Three Korean cultural properties have been added to UNESCO's Intangible Cultural Heritage of Humanity list. With the new designations, South Korea now has a total of 14 cultural assets on the list.
KBS World Radio's Bae Joo-yon has more.

REPORT: The traditional Korean martial art of "taekkyeon", tightrope walking, called "jultagi" in Korean, and the weaving of fine ramie, or "mosi" in the Hansan region, have been registered on UNESCO's Representative List of the Intangible Cultural Heritage of Humanity.

The administration's decisions came after South Korea sought to have six properties registered on the UNESCO list. The three properties that did not make the list are the royal cuisine of the Joseon Dynasty, a ceremony held in honor of great Confucian scholars called Seokjeon Daeje, and the art of mother-of-pearl inlaying known as Najeon.

The UN organization's designation of taekkyeon is considered to be all the more significant as it is the first form of traditional martial arts that has been recorded on the UNESCO's Intangible Cultural Heritage of Humanity list. UNESCO said taekkyeon has been passed from generation to generation and promotes cooperation and solidarity among its practitioners. It added that the addition of taekkyeon to the list could improve the visibility of similar martial arts around the world as a part of intangible cultural heritage.

UNESCO describes jultagi as a traditional performing art of great complexity that integrates musical, choreographic and symbolic expressions of Korean culture to delight and entertain audiences. The organization also said that jultagi is a testimony of human creativity and by joining the ranks of other cultural assets on UNESCO's list, it could contribute to promoting intercultural exchange by drawing attention to different types of tightrope walking worldwide.

UNESCO said weaving of Hansan mosi traditionally takes place in the form of women-led family operations in which mothers transmit techniques and experience to their daughters or daughters-in-law. The tradition also binds the community together with neighbors gathered and working in a designated section of the town.

"3 Korean Cultural Properties Added to UNESCO List"
by HanCinema is licensed under a Creative Commons Attribution-Share Alike 3.0 Unported License.
Based on a work from this source