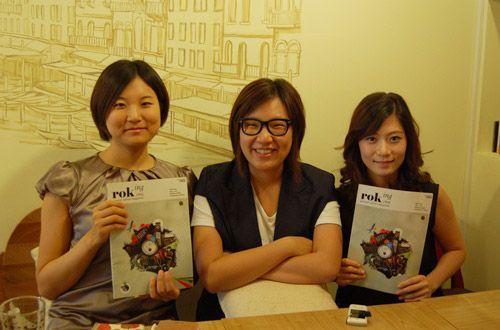 Three Korean women in their 20s have launched a magazine that aims to inform more people around the world about Korea. Byon Sarah, Choi Jung-yoon and Park Sang-aa's magazine is called "...ing", from the abbreviation of "Republic of Korea".

Byon, who is the publisher, went to the U.S. to study when she was just 16. There she says she encountered some absurd questions about her country from her foreign friends and became aware of the need to promote it better. As a senior at the University of Washington, she saw people wearing rubber bracelets as part of various awareness campaigns and launched her own campaign by passing out bracelets with the slogan, "Dokdo is Korean territory".

Energized by their campaign, Byon and Park decided to launch a magazine. At this point Choi, a broadcast scriptwriter and friend of Byon's joined in. They started working on the inaugural edition in February this year. Byon handled planning, Park did the layout, and Choi was in charge of interviews and translation. Byon shelled out W10 million (US$1=W1,170) she had saved up working part-time for the deposit on the office space they are renting.

But they still needed W5-6 million a month to make the magazine, including costs for interviews and photo sessions. They wanted it to be free, so the money had to come from advertising, but they couldn't find anyone who was willing to put ads in a fledgling magazine. Instead they applied for a program by the SK Group supporting social-awareness projects and received a W10 million donation. Park pitched in more money she earned as a stylist, while Choi spent part of her salary as a scriptwriter.

The inaugural issue of ROKing came out on Aug. 23. It cost them W40 million, and they plan to use the deposit on their office to cover the costs for the second edition. They published 5,000 copies of the inaugural issue -- 2,500 each for domestic and overseas distribution. They are turning to the help of Korean students' associations at U.S. universities to display the magazines in cafeterias. They also plan to display them in the cafeterias of Microsoft, Amazon, NASA and other U.S. companies and organizations and increase the area of distribution with the help of their friends in the U.S.

They plan to make ROKing a bimonthly magazine and available on smartphones as well from the next issue.

"At ROKing, everyone can be a goodwill ambassador for Korea", Byon said. "Our teachers, bank workers, application developers, professors and other friends contributed to the inaugural issue, and we hope more people can pitch in from now on".