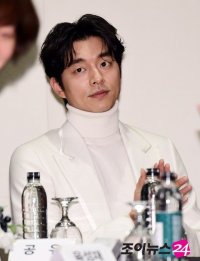 Actor Gong Yoo was ardently greeted by Japanese fans when he arrived in Japan Sunday to promote the Japanese film "Like a Dragon", in which he appeared.

An official from his agency, Sidus HQ, said that his promotion tour was kept a secret out of safety concerns, but that 300 Japanese fans crowded the airport to see the Korean heartthrob.

On Monday, Gong attended the film's premiere in Tokyo that gathered reporters from 200 media outlets and 700 audience members.

Director Takashi Miike said that Gong's acting heightened the presence of his role in the film, and that he's already a good actor but has "unlimited potential" to become the best. He said he wants to work with Gong again.

Gong said he was honored to participate in such a great film and that he learned a lot from the project. He said it was a great experience as he realized that teamwork was possible despite language and environmental barriers.

"Like a Dragon" takes place on a sleepless night on Shinjuku street. Top Japanese actors Kazuki Kitamura and Goro Kishitani appear in the film, and Gong plays the role of a mysterious sniper.