3D film out to compete with Hollywood 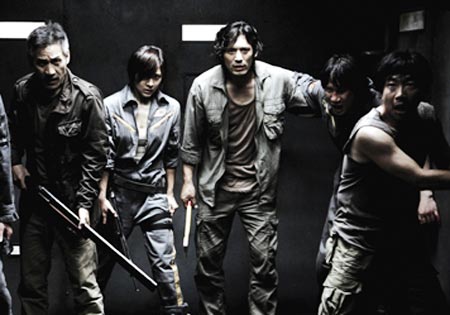 Makers of the 3D action film "Sector 7", of which distribution rights have already been sold to 46 countries, call it a ruthless venture that is out to compete with Hollywood.

"It's not about trying to catch up with post-'Avatar' Hollywood but trying to compete with it, and someone has to keep on trying", director Kim Ji-hoon, who has helmed action-packed works such as "May 18", told the press in Seoul, Thursday.

"Before I've always been concerned about the integrity of a movie but here I focused more on the value of a film ... I wanted to make a movie that I wanted to watch as a member of the audience".

"It was a reckless endeavor to say the least", said VFX supervisor Jang Seong-ho, head of the Seoul-based MoFac Studio.

"'Avatar' totally went extreme; it realized something that should have come out 10 to 20 years later. But of course James Cameron is a genius and has massive resources. I'm not a genius, but I have tried a lot of unprecedented things in my 18-year career for this film".

Though Korea has seen underwater monsters like the one in Bong Joon-ho's "The Host", Ha designed a creature that transforms throughout the film. "I went asking for trouble, but I really wanted to do something different".

The story is about the crew of an isolated oil rig off the southern coast of Jeju Island that, while trying to drill for oil, procures something much more unlikely - a sea monster. With communications cut off from the mainland, the team must fight to survive.

Producer Yoon Je-kyun said he planned the film to be in 3D since the beginning, even though the audience size for 3D movies is actually decreasing.

"It's important to ask whether 3D is the dominant trend or a fleeting fad. But I think it's neither; there is a genre that is befitting for 3D, that utilizes the medium in an efficient and effective way", said Yoon, who directed the 2010 smash hit "Haeundae".

"I consider 'Sector 7' a 'realization movie', meaning that it invites the audience into the limited space of an oil rig, allowing viewers to feel things firsthand".

The film was not shot with a camera rig (a device that holds together two cameras that capture the subject from two different angles or stereoscopic vision), but instead achieved stereoscopic visual effects through CG and converting it from 2D to 3D. Actors shot most of the scenes in front of a green screen while 1,748 scenes out of 1,802 were rendered in CG.

"Some people called 'Sector 7' a 'fake 3D' movie since it wasn't shot with a camera rig. But since a CG monster stars in about 70 percent of the film it wasn't necessary to use the rig", said Ha.

For the actors, it was challenging to fight with an imaginary creature.

"When the director would say, 'look here', the actors would all look in different directions. There was also a scene where an elevator crashed, and we would react differently. But over time the cast members were able to develop teamwork like no other, acting with one heart and mind", said Ahn Sung-ki.

But the makers say that some of the most impressive scenes in the film were achieved by the talented cast. In particular, actress Ha Ji-won, who plays tough heroine Hae-ju, pulled off most of the stunts herself, from wire action sequences to speedy runs on a motorcycle.

"We wouldn't have been able to make the movie without Ha Ji-won", said the director, after the actress began tearing up.

"3D film out to compete with Hollywood"
by HanCinema is licensed under a Creative Commons Attribution-Share Alike 3.0 Unported License.
Based on a work from this source