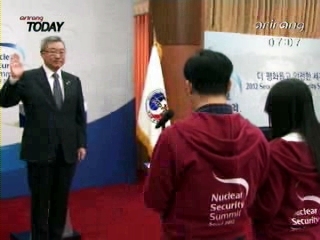 A total of four Korean entertainment stars were appointed honorary ambassadors for the second Nuclear Security Summit slated to be held in Seoul next March.

US-born songstress Park Jung-hyun, actor at the center of the "Korean Wave" Jang Keun-suk, and two beloved child actors were named on Thursday to lead promotional activities emphasizing the importance of nuclear security and world peace.
Foreign Minister Kim Sung-hwan asked the ambassadors to fully utilize their global image and popularity at home to help people in Korea and beyond better understand the summit and its objectives.

And Park is slated to record a promotional song for the summit, dubbed the "Peace Song", in both Korean and English.

[Interview : Park Jung-hyun, Honorary ambassador Nuclear Security Summit Seoul 2012] "My skills as a singer can come in, as a musician, but not only that I can also use my background in terms of having grown up in the United States and use my English language skills, as well as my Korean language skills to be able to make it into an international song".

Meanwhile, 60 so-called e-reporters, pre-selected to report on the summit, officially began their roles.

[Interview : Cho Hee-yong, Secretary General Nuclear Security Summit Preparatory Secretariat] "We hope by taking advantage of new media, they will play a constructive role in introducing Korea to the world, and to get the support from the international community for the success of the Seoul Nuclear Summit".

The two-day Seoul Nuclear Security Summit, starting on March 26th of next year, will host over 50 heads of state and international organizations for discussions on the safe use of nuclear energy and preventing terrorists from access to nuclear materials.

"4 Korean Entertainers Named Honorary Ambassadors for Seoul Nuclear Security Summit"
by HanCinema is licensed under a Creative Commons Attribution-Share Alike 3.0 Unported License.
Based on a work from this source