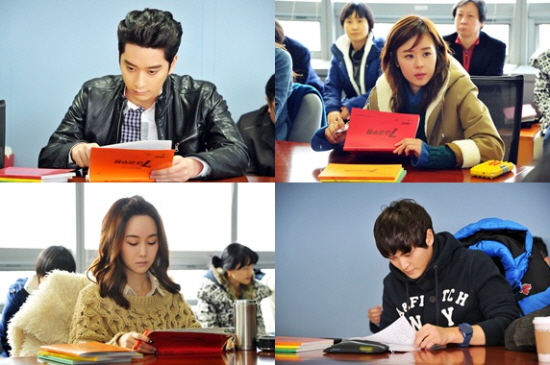 Choi Kang-hee, Joo Won and other main casts of the drama were seen practicing their scripts on the 13th in the MBC Dream Center.

Producer Kim Sang-hyeob said, "Here are the youths and passion. Please tell me any ideas you can think of. Let's make a great drama together".

Choi Kang-hee in the role of Kim Seo-won said, "I am happy to be in this drama with people I respect and have respected until this time".

Joo Won in the role of Han Gil-ro said, "I still lack in many things but I am happy to be in this drama and I am going to learn a lot from the seniors and fellow casts".

The first script reading was blown away by the middle aged actors and actresses. Ahn Nae-sang in the role of Kim Won-seok in the National Intelligence Agency overwhelmed his juniors with powerful voice. Lee Han-wi and Kim Mi-kyung in the roles of Kim Seo-won's parents were so good in their fake dialects that it made everyone laugh.

Special agent Kong Do-ha played by Hwang Chan-sung performed the song "Put Your Hands Up" by 2PM and received a round of applause. He also said, "I will do my best as actor Hwang Chan-sung and not 2PM".

"7th Grade Civil Servant" is a happy drama about the agents and their way of life and work with the cast of Choi Kang-hee, Joo Won, Hwang Chan-sung, Kim Min-seo and more.

This is collaborated by writer Cheon Seong-il who wrote the movie "My Girlfriend is an Agent" and director Kim Sang-hyeob. It is to be aired in January after "Missing You".

""7th Grade Civil Servant" script reading, Joo Won and Choi Kang-hee"
by HanCinema is licensed under a Creative Commons Attribution-Share Alike 3.0 Unported License.
Based on a work from this source