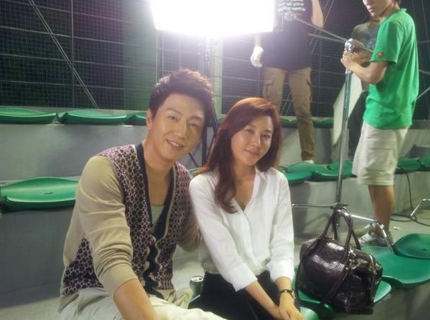 Actor Kim Soo-ro posted a picture on his Twitter on the 8th of July saying, "Romance comedy queen Kim Ha-neul is queen indeed!"

In the picture, Kim Soo-ro and Kim Ha-neul are staring into the camera. They seem to be on a break from the SBS weekend drama "A Gentleman's Dignity".

Netizen's say, "Kim Soo-ro is handsome everyday", "The fourteenth episode was so sad", "I cried with Kim as she cried", "She's such a good actress" and more.

Meanwhile Seo Ee-soo (Kim Ha-neul) and Kim Do-jin (Jang Dong-gun) broke up after it was clear that he was the father of Collin (Lee Jong-hyeon) in the SBS drama "A Gentleman's Dignity".

""A Gentleman's Dignity" Kim Soo-ro and Kim Ha-neul"
by HanCinema is licensed under a Creative Commons Attribution-Share Alike 3.0 Unported License.
Based on a work from this source