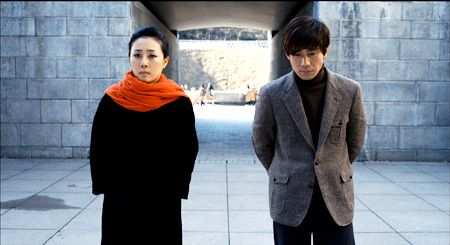 Moon Jung-hee, left, stands with Shin Ha-kyun in a scene from the directorial debut of Jung Sung-il, "Cafe Noir". The epic film combines the stories of Goethe's "The Sorrows of Young Werther" and Dostoevsky's "White Nights". /Courtesy of Sponge

For film critic and first time director Jung Sung-il, movies meant more than just what he was watching and the writing, and this deep interest eventually led him to make his own offering: "Cafe Noir".

Jeong has transformed two of his favorite novels— Goethe's "The Sorrows of Young Werther" and Dostoevsky's "White Nights" — into a 198-minute film, capturing the mysterious meaning of life, death, realization and most of all, love.

"It's a movie that brought the two books ("The Sorrows of Young Werther" and "White Nights") to reality", the director said during a press conference following a preview Wednesday. Discouraged by the tragic death of the protagonist from "Werther", he held on to that memory for a long time, and finally changed the conclusion and kept his version of Werther alive. For the time being, at least.

Young-su, played by Shin Ha-kyun ("Thirst"), and the married Mi-yeon, played by Moon Jung-hee, are having an affair, but Mi-yeon decides to end the relationship after her husband returns from a long business trip. Young-su is heartbroken and wanders the streets of Seoul like a ghost not knowing how to cope with his loss. After an uncomfortable encounter with the husband at a birthday party for the couple's daughter, Young-su decides the only way to escape the pain is to kill himself, but delays his plans after meeting the mysterious Seon-hwa, played by the excellent actress Jung Yu-mi.

To start with, this movie is not a tear-jerker nor is it a pretty romantic comedy. The tone is calm, gloomy and gray, yet the actors shine amid the foggy undertone. The director squeezes in the two novels through a subtle yet impressive way. After a running time of an hour and 40 minutes, he places the title and credits in a bookstore scene where Young-su flips through the two books "Werther" and "White Nights" — serving as a false ending to combine the two stories into one. The tale of the sad and miserable Young-su ("Werther") smoothly gives way into a more colorful and vibrant tone, yet still features the same lonely endeavor toward soul searching and mending broken hearts ("White Nights").

"Cafe Noir" may be a bit puzzling at first. The characters seem to be living and acting from within a trance, reading their lines from scripts. Though the heavy storyline feels glacial, several scenes leave a striking, poignant impression. The image of Seon-hwa dancing in a late night cafe leaves you wondering: Are you in a dream, and if so, whose dream is it? The mundane banalities of city life creep into the viewer's mind as something familiar, but after seeing them pass by quickly through the eyes of the characters, you start to wonder if they really exist in the protagonist's world. Young-su's dizzy wandering is disturbing but easy to sympathize with, making the viewer wonder if death really is the solution to ending misery.

"I wanted to realize the letters of the books through the bodies and souls of the actors", the director explained, and indeed the emotions from the two classics burst forth vibrantly from the impeccable actors. Whether or not the viewers share the message of the director, it is a unique experience to wander the streets of Seoul, swimming through the heavy emotions of love and loneliness at the same time and place.

In theaters Dec. 20. Distributed by Sponge.