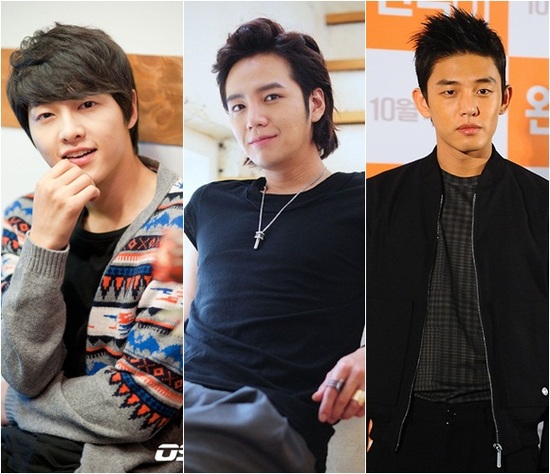 Jang Dong-gun, Jung Woo-sung and Lee Jung-jae are well known as the 1990s troika. They were popular not only for dramas, but also movies, and now it seems like three new actors will carry on the tradition.

In Chungmuro there was a lack of outstanding actors in their young 20s, but these days Jang Keun-suk, Song Joong-ki and Yoo Ah-in stand out.

Even after rapidly becoming a Hallyu star, Jang Keun-suk was number one on the list to cast for dramas and movies. Having been in movies like "Do Re Mi Fa Sol La Si Do" and "The Case of Itaewon Homicide" Jang Keun-suk doesn't have a prominent role in Chungmuro but his steady acting has always been a merit. He is now active with the movie "You Pet" with Kim Ha-neul.

Song Joong-ki and Yoo Ah-in have become youth stars after starring in the KBS 2TV drama "Sungkyunkwan Scandal". They were in the same drama together.

Song Joong-ki is currently expanding his spectrum through various roles with his straight and proper image. Without concern for those typical roles, his latest attempt can be seen in the drama "Deep-rooted Tree" and the movie "Penny Pinchers".

Yoo Ah-in is standing out for his rebellious look yet firm acting skills. Having starred in movies like "Antique" and "Sky and Sea", his recent role in the movie "Punch" with Kim Yun-seok has earned him good points with movie lovers.

About this, Song Joong-ki said, "It's nice that actors of a similar age are at the center of attention and that we are all getting steady work. I hope we continue like this as friends and co-workers and not as rivals. I think we will all last long in this business like Jang Dong-gun, Lee Jung-jae and Jung Woo-sung. Some say this is a 'challenge between rivals' but I don't think so. We are actors who will live on". About Yoo Ah-in, he said, "I am so happy that the four main actors from "Sungkyunkwan Scandal" turned out to be so successful. Yoo Ah-in is especially in the highlight these days and I am sincerely supporting him. I envy him but I'm not jealous. He acts well and is one of the most sincere actors I know at this age. He thinks too much about acting and I admire that".

"A new troika to follow Jang Dong-gun, Jung Woo-sung and Lee Jung-jae?"
by HanCinema is licensed under a Creative Commons Attribution-Share Alike 3.0 Unported License.
Based on a work from this source