A noir tragicomedy with rhythm and zest 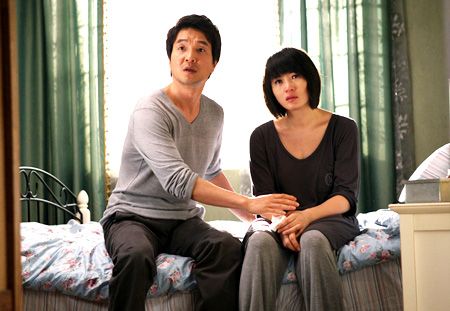 Actors Han Suk-kyu, left, and Kim Hye-soo appear in a scene from "Villain and Widow". The latest film by "My Scary Girl" director Son Jae-gon opens in theaters Nov. 25. / Courtesy of Sidus FNH

In the 1995 comedy “Dr. Bong,” Kim Hye-soo played the role of an irritable single woman who becomes involved with a philandering widower, comically brought to life by Han Suk-kyu, who lives with his eight-year-old son in the apartment downstairs. The son recognizes great mother material in his neighbor and sets out to marry off his father.

Fifteen years down the road, the two actors have reunited onscreen — this time Kim is the one mourning her husband's death while Han is the mysterious man renting the second floor of her house. But our heroine's grumpy teenage daughter is far from willing to play cupid like in the plot of “Dr. Bong” — because in fact “Villain and Widow” isn't exactly a romantic comedy.

Director Son Jae-gon made a name with “My Scary Girl,” introducing the suspense of crime thrillers into the romantic comedy genre with wit and style, and this time, he brings yet another deliciously noir tale rooted in tragicomedy.

As its title suggests, it's about a widow and other characters with ulterior motives. After losing her husband in a freak accident, Yeon-ju (Kim) tries to make ends meet by running an antiques store while raising her pouty teenage daughter Seong-a (Choi Ji-woo-I). Desperate for money, she puts the house's second floor up for rent. Chang-in (Han), who claims to be a novelist looking for a quiet place to write, moves in for two months.

But our heroine, suffering from depression and much in need of cash, doesn't notice how strangely obliging and eager Chang-in is to rent the space. This is because he is actually an illicit arts dealer who heard about a 2 billion-won antique porcelain that Yeon-ju's late husband hid somewhere in the house.

So this thieving tenant thus gets busy to work during the daytime when the mother and daughter are out. When he discovers that the prized relic is nowhere to be found on the second floor, he sets out to infiltrate Yeon-ju's home, which involves stealing her keys and, of course, her heart.

Most of the story takes place inside the two-story house, with very fleeting moments in other venues Given the limited number of locales and characters, it's no easy feat trying to orchestrate circumstances that would elicit laughter, but the director shows off his knack for meticulously coordinated comical situations — a result of tough labor, working with 2,600 cuts in the 115-minute running time. Add to that some rhythmic scores apt for a crime thriller.

Moreover, a double-edged sword of tragicomedy slices right through the heart of the film to make it all the more convincing, as it portrays characters with very human imperfections. Chang-in finds it increasingly difficult to get down to business — Seong-a, a former child model, suffers from cruel remarks by netizens and classmates, and is constantly cutting class to stay home while Yeon-ju, emotionally vulnerable and increasingly dependent on alcohol, finds a new diversion in her sexual affair with Chang-in and doesn't want to get out of bed.

The man thus unintentionally finds himself carrying domestic issues at hand, trying to send a kid back to school and inspiring professional integrity in a depressed woman, while also dealing with his own mid-life crisis of sorts. Despite his ill intentions, however, the man remains rather amiable (though the physical violence he resorts to in the more dramatic scenes is unwarranted).

Comedy is certainly dictated by culture codes. Yet even non-Korean audiences, completely unaffected by the star power of the cast members, could easily relate to the poking fun — a gesture that is no way light — at broken spirited urbanites, which the film does with rhythm, zest and a certain warmth.