A Review of "The Greatest Love" 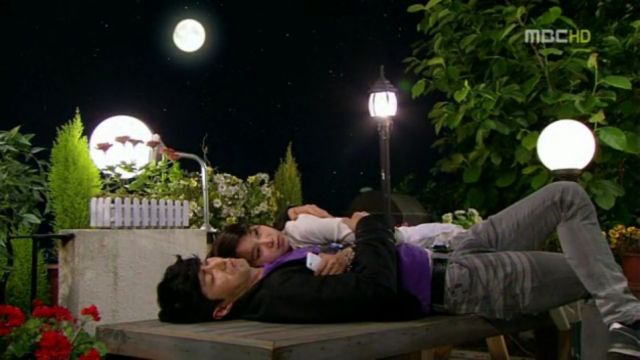 NOTE: The following review contains spoilers. I've tried to limit them to those that are the least revealing, but they may still prove upsetting to some readers. You have been warned.

My Korean drama obsession continues to grow, with good reason. My latest online joy is "The Greatest Love".

At first, I wasn't sure I was going to like this drama. Between the ludicrous vanity of Dokko Jin and the amateurish, cheesy sound and visual effects used in the humor elements, I was initially put off and fully ready to write a scathing review expressing my disappointment. Once I got past these too-broad strokes, however, I found the characters themselves seem well-formed and memorable and the script to be a work of surprising depth and meaning.

The concept of romance developing through psychological conditioning is especially interesting to me. Repeatedly, Dokko Jin hears the old pop song "Thump, Thump" when he's near Ae-Jung, and it makes his heart beat faster. The fact that because of his LVAD (artificial heart), he always wears a pulse monitor to alert him to his racing heartbeat serves as reinforcement of the conditioning. The writers even included this theory as a monkey wrench in the developing relationship. This theory turns out to be a mask, however, as more and more, Dokko Jin realizes that this woman has a stronger, tougher, and braver heart than anything that could ever be implanted in his chest. What starts as pity grows to admiration, to a quiet awe, and to a fiercely protective love that's just shy of being a force of nature.

Gong Hyo-jin is breathtaking and heart-wrenching in her portrayal of Goo Ae-Jung, a quietly stolid, long-suffering entertainment has-been struggling to make ends meet and support her family. I feel very safe in saying that if you don't cry for the plight of Ae-Jung, you're not human. While there are some similarities between Goo Ae-Jung of "The Greatest Love" and the role of Seo Yoo-Kyung in "Pasta", Ms. Kong's portrayal here is a step above and beyond that of Pasta's junior chef, and truly exemplifies the title, as she takes upon herself the troubles of all whom she loves, even those who have wronged her. The way she carries the role of media martyr with never a hint of smugness or superiority makes this performance a wonder to behold. Kong herself IS a wonder, an actress with talent that any director should feel honored to work with.

It says something when it takes 2 male leads to match up to the female lead. Such is the case with Ae-Jung's romantic interests, Dokko Jin and Dr. Yoon Pil-Joo (Cha Seung-won and Yoon Kye-sang). The former is a spoiled action film star at the height of his career while the other is a quietly brilliant doctor of Asian medicine. Both roles seem to suffer from overacting at first, from the good doctor's Buddy Holly image and apparently complete separation from all social rituals, to the awkward, forced feel of Dokko Jin's laughter. These are quickly taken care of as the characters become more developed by episode 3, but neither achieve the instant believability of Ms.

Kong's heroine. This seems to be part of the overall design of the series, as truly, Jin & Yoon have the most character transformation in the series, and the development process itself is well-crafted. Mr. Yoon is perfect as the dejected yet loyal could-have-been prospect, and Mr. Cha, while still maintaining a robotic, wince-inducing laugh from beginning to end, still shines brightly as the scoundrel transformed by love. His buddy relationship with Ae-Jung's nephew, Goo Hyong-Kyu (Yang Han-yeol), nicknamed "Ding Dong", is exceptionally endearing, and prepares the audience for an ending that split my face in a grin so wide, my jaw still aches. Most believable are Dokko Jin's moments of insecurity, where his pride wrestles with the honesty of his love, and the moments where his love shines through him with a tender warmth so convincing, it very literally needs to be seen to be believed.

The only wasted space throughout Greatest Love comes in the form of Ae-Jung's Father and Pil-Joo's mother (Han Jin-hee and Park Won-sook). Both are roles filled by veteran actors with impressive resumes to their credit who are capable of so much more. It really is the shame of the Hong sisters for not scripting those parts with more depth and integral meaning to the larger story.

Aged parents aside, the supporting cast is a credit to both writing and acting. Yoo In-na is very nearly perfect as Kang Se-Ri, Ae-Jung's narcissistic former band-mate and the only member of National Treasure Girls to still enjoy the spotlight. Lee Hee-jin is similarly memorable as Jenney, another N.T. Girl and Ae-Jung's best friend, who now runs a quaint pizzeria and enjoys flirting (i.e., toying) with the different men that come into her life. The way Jenney blatantly plays the men's jealousy off each other without apology is one area where the comedy is done exactly right. The previously mentioned "Ding Dong" is adorable and flawless - Yang Han-yeol is a child star to watch for. Jung Man-sik is also on the mark as the slimy and bitter former manager of the N.T.G. who still has an axe to grind for Ae-Jung. His performance generates all the dislike you could ask for in a villain and is what makes the award show scene with Dokko so very satisfying. Also worthy of mention is Im Ji-kyu as Kim Jae-Seok, Dokko Jin's manager and the closest thing he has to a best friend in a world where everybody has an agenda. The scene where he comes, drunk and upset, to Dokko Jin's home is one of the funniest and more disturbing scenes I've ever had the privilege to witness. I've laughed myself to tears through 6 viewings so far.

Perhaps the greatest surprise among the supporting roles is President Moon, played by Choi Hwa-jung. A relative novice to the screen, the 50-year-old Choi plays the CEO of Ae-Jung's & Dokko's management company with amazing depth and complexity. Much like Jae-Seok, Moon is a manager who genuinely cares about her clients, but as a veteran of the business, she's too shrewd to fight battles that she knows cannot be won. A perfectly balanced combo of brains, ambition, and heart, the only thing I didn't like about this character was the bulky covers on her cell phone. Though late to the TV side of show biz, Ms. Choi proves that all good things are worth waiting for, and that she is among the best. Somebody needs to give this woman an award.

Two dramatic elements that make the series especially smart are the gradual role-reversal between Dokko and Ae-Jung and the recurring floral theme. All the embarrassing things that happen to Ae-Jung in the first part are revisited upon Dokko, and almost solely because of his love for Ae-Jung. It's truly a double dose of comedic hysteria every time the audience sees Dokko get into the exact same mess he previously yelled at Ae-Jung about, almost always making it worse by his inferior cover-up skills.

The floral theme is especially important, not only because flowers represent love in popular culture, but on a more cerebral level, they also represent the physical union of love, being both the male and female reproductive organs of the plant. Greatest Love certainly does not skimp on references to desire of the body, and the flirtation keeps the romantic tension humming without ever becoming crude. The Azaleas theme runs especially deep, in part because Dokko quotes it to Ae-Jung in a gender reversal of the poem's traditionally understood voice, but also because when the inevitable crisis looms, Ae-Jung finds herself using the Azaleas theme in response to Dokko's self-comparison to a race car. It makes both the crisis and the character of Ae-Jung all the more poignant, dear, and indelible. However, even more moving is the potato flower theme. Dokko raises a potato after "executing" two more from the same batch that Ae-Jung brought him. The two executed potatoes represent wasted chances he's had to be honest with Ae-Jung and to be in a relationship with her - namely, not being forthcoming about how he hired a crew to locate both a cherished pen and the shoe Ae-Jung lost looking for it, as well as obliquely accusing her of trying to seduce him just to further her own career. The surviving potato and the plant that sprouts from it are symbolic not only of Ae-Jung, but also of Dokko's last chance to win her heart, while the nurturing that Dokko gives to the potato plant runs parallel with the tender care he gives to Ae-Jung's feelings. All this culminates when Ae-Jung sees potato flowers in a finale that takes two episodes to cover and is among the most satisfying ending to any TV series I've seen to date.

Despite its initial shallowness, "The Greatest Love" is a drama with sincerity of heart and a depth that seems all the richer because of the shallow start. In the very last scene, I found myself answering back, "I am indeed honored". (You'll need to watch the entire series to understand that.) A warm and beautiful story of the amazing transformational power of love, it's sure to become a classic, at least in my household.

Final Rating: 9 out of 10 stars. Brilliant and inspiring, without ever taking itself too seriously.

Links To The Show:
DramaFever (USA and Canada only)
Viki

NOTE: DramaFever's setup is strictly playlist autoplay, with no static home pages for the shows. The above DramaFever link is for the trailer, which the site labels as Episode Zero. After the trailer runs, the page will automatically load Episode One.

"A Review of "The Greatest Love""
by HanCinema is licensed under a Creative Commons Attribution-Share Alike 3.0 Unported License.
Based on a work from this source