A Rising Star on the Gayageum 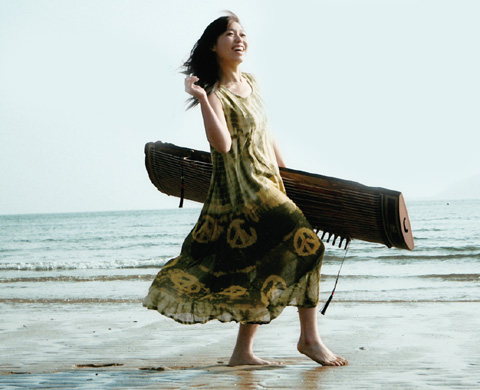 Gayageum singer-songwriter Jung Mina's first album in 2007 sold over 10,000 copies, and one of the tracks was listed in a music textbook for middle school students. Jung set off on a busking tour with members of her band in 2009, and the record of the 15-day tour that included 23 sessions was made into the documentary "Fantastic Modern Gayagumer", which was released on Aug. 18.

The documentary was screened at the Jecheon International Music and Film Festival that concluded on Aug.16. "I started busking after I heard the story of an indie band that sold 2,000 CDs through busking", Jung recalls. "But I managed to sell only 103. Still, we played happily even when there was just one person listening".

Jung's first encounter with the traditional instrument was when she learned Korean traditional dance in elementary school. She started taking gayageum lessons seriously from a local teacher in the neighborhood from her second year in middle school and went on to study at Gukak National High School, Hanyang University, and finally at Sookmyung Women's University. While on leave from her graduate studies, she worked part-time in a club in the trendy Hongik University area, and the owner of the club persuaded her to start composing and perform on stage.

When she was an undergraduate, Jung used to work at the ticket office of a racecourse every weekend for four years. After taking leave from graduate school, she worked in a call center. "It's difficult to make a living out of music. It's difficult to get a job because we can do just one thing, which is play the instrument. I have a number of friends from the same year who worked at a call center after graduation".

But Jung was able to quit the job in 2007 and released her first album. But then things got tough again, and at one time she sold rice balls near Gwanghwamun Station on Subway Line 5, but had to give up after 10 days due to her lack of knowledge and skills in the market. "If I didn't have these experiences, I wonder whether I could have written the music I did, because the only thing I knew was Korean traditional music", she says. "I think I would be making only shallow and superficial music".

These days, she still only earns W800,000 to W1 million a month through concert planning and performing on stage in cafes and clubs in the Hongik University area, but she is happy to continue to do what she loves to do most.

In the film, Jung talks about the hardships the family had gone through when she was young, and describes how her mother had to shoulder a lot of responsibility to feed the family. "I feel uncomfortable about revealing my private life. I haven't even told my father about this film yet", she admits.

"Although I love Korean traditional music, my music is Indie folk based on the gayageum. Regardless of the genres, I would like to continue with music that's natural", said Jung. "I can't live without the sound of the gayageum and without singing. It's just a natural instinct like eating when you're hungry. Tough times may come back again, but I'm confident that the right answer will come at the right time. So there is not much to worry about".

"A Rising Star on the Gayageum"
by HanCinema is licensed under a Creative Commons Attribution-Share Alike 3.0 Unported License.
Based on a work from this source