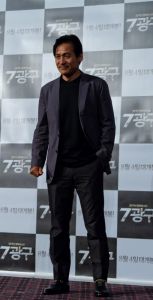 Actor Ahn Sung-ki received Wednesday the Culture prize at the13th Nikkei Asia Award in Japan. Awarded by Nihon Keizai Shimbun (Japan Economic Times), one of Japan's largest media corporations, it is given to those who contribute to enhancing the lives of Asians.

The 56-year-old was recognized for his efforts to promote and protect Korean cinema. The star of "Silmido" (2003) was also recognized for supporting joint film projects among Korea, Japan and China. One such film is "Battle of Wits" (2006), a big budget epic movie starring An and Andy Lau and directed by Julian Cheung.

Ahn is a familiar screen persona through box office smashes like "May 18" (2007). He's also a winner of multiple film awards, including Best Actor for "Radio Star" (2007 Daejong Film Festival) and a special recognition for 50 Years of Acting (2006 Daejong Film Festival). He is currently the honorary ambassador for the upcoming 2008 Daejong Film Festival (May 24-28, award ceremony June 27), Korea's equivalent of the Academy Awards.

"Actor Ahn Sung-ki Gets Japanese Culture Award"
by HanCinema is licensed under a Creative Commons Attribution-Share Alike 3.0 Unported License.
Based on a work from this source