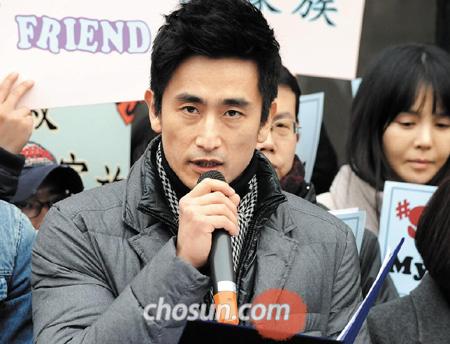 Actor Cha In-pyo has stepped forward in a campaign to stop Beijing repatriating North Korean defectors who were arrested in China. "This is a matter of life and death", he says. "It involves helping our own people, and ideological differences are not important. Saving lives transcends politics or diplomacy".

Cha took part in press conferences in front of the Chinese Embassy in Seoul on Saturday and Tuesday along with 20 other celebrities and called on the international community to prevent Beijing from repatriating North Korean defectors. Widely respected for his acts of goodwill, including adopting orphaned children, Cha is at the forefront of attempts to muster international support to the cause.

"North Korean defectors face execution if they are sent back", he told the Chosun Ilbo on Wednesday. "I sincerely hope that the people of China take humanitarian steps and offer hospitality and safety to the defectors". He said he was prompted to hold the press conferences because he wanted to help the students of Yeomyung School, a school for defectors in South Korea.

Actor Cha In-pyo reads a plea urging Beijing not to repatriate North Koreans, in front of the Chinese Embassy in Seoul on Tuesday.

He found out about the school when he starred in the film "Crossing", which portrays the plight of North Korean defectors, and became a sponsor and hosted several fund-raising events. "When they heard that Beijing wants to repatriate the North Korean defectors, the students became very sad, and I felt that I could not just sit by", he said.

"North Korean defectors are like pinballs in the international community", Cha said. "Neither China, Mongolia nor South Korea wants them, so they are bounced back and forth, and their misery increases. They escaped to survive, but nobody gave them refuge".

The actor criticized those who treat the issue from an ideological or diplomatic perspective. "Everyone wants to argue whether they are defectors or economic refugees. But that isn't the point. The most important thing is that they crossed the border because they were unable to suffer hunger any longer", Cha said. "I heard that North Korea ordered security forces to wipe out three generations of defectors who crossed the North Korean border into China during the mourning period for Kim Jong-il. If they are repatriated, they face execution".

Cha called on South Korea as well as China to help North Korean defectors. "Most children of defectors want to erase any traces of their past. They dye their hair and put on new clothes. Every time I see that, I tell them to try their best to adjust to life in the South and give hope to other North Koreans", he said. "When they lead a happy life here, other North Koreans will be able to have hope. We have to offer a helping hand first".

"Actor Cha In-pyo Campaigns for N.Korean Defectors"
by HanCinema is licensed under a Creative Commons Attribution-Share Alike 3.0 Unported License.
Based on a work from this source