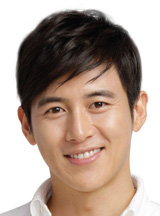 Actor Go Soo (34) will marry a college student 11 years his junior on Feb. 17 in a private ceremony, his agency BH Entertainment said on Wednesday. According to a press release, Ko first met his bride-to-be, a 23-year-old art student, in 2008 and they have been dating ever since.

"As Go Soo will start shooting his new movie in March, they moved the wedding date forward", the agency said.

On Wednesday morning, prior to the announcement, Ko posted a message about his wedding plans on his fan site, revealing that he fell in love with a woman in 2008 and they both immediately knew they had found their perfect match.

"We decided to be together our entire lives because we trust and depend on each other more than anyone else", he said.

Since Ko made his debut in a music video in 1998, he has appeared in a number of TV dramas and movies such as "White Night" and "The Front Line".

"Actor Go Soo to Exchange Vows with Art Student"
by HanCinema is licensed under a Creative Commons Attribution-Share Alike 3.0 Unported License.
Based on a work from this source