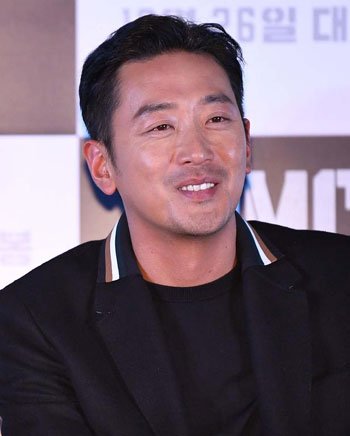 Actor Ha Jung-woo does not have an overpowering screen persona or great looks, but he is a reassuring presence, striking a perfect balance between playfulness and seriousness while others chew up the scenery.

That is why he has become one of the biggest stars in Korean cinema and his filmography includes some of the biggest hits like "Assassination", and the "Along with the Gods" series.

His latest film, "Take Point", which hit theaters on Wednesday, promises to be a memorable addition.

In addition to being a hugely successful actor, Ha is a screenwriter and director of two films, "Fasten Your Seatbelt" and "Chronicle of a Blood Merchant", an established artist and a writer of two books of essays.

He made his writing debut with a collection of essays on art and acting in 2011 and last month published a book about his lifelong love of walking.

Ha describes himself an artist with a disciplined lifestyle and insists that the perception of artists as moody and emotional, prone to drinking, drugs and a dissolute lifestyle is wrong. Ha walks, draws, paints, and does at least three films each year.

In his new book, Ha explains the reason why he walks over 30,000 steps each day. "I think your life just gets destroyed at some point if you believe that good ideas come in some kind of serendipitous moment out of the blue. My belief is that inspiration comes from good life. My work is not bohemian, it's like going to the office preparing for a very important presentation that has future of the company at stake".