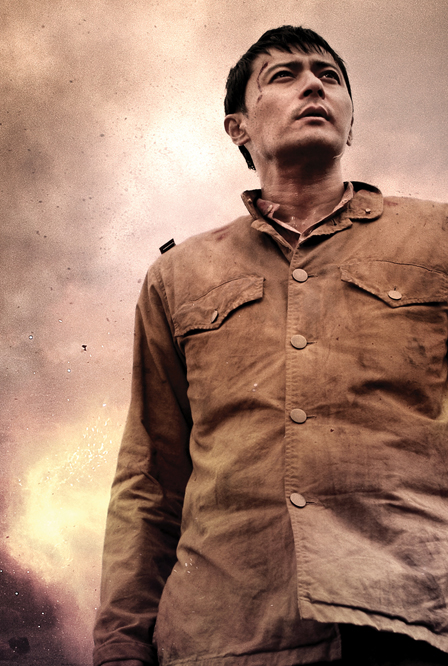 After starring in Korea's biggest budget war movie of all time, actor Jang Dong-gun met with Korean Cinema Today's LEE Hwa-jung to talk about his work.
Based on a true story, "My Way" is about the unbelievable journey of a Korean man who was drafted by the Japanese army during World War II. He was captured by the Russians and put in a labor camp, then became a soldier in the German army, and finally was captured by the US army in Normandy. A record of the spectacular struggle of an individual in history, director Kang Je-gyu's latest action dramastars Jang Dong-gun in the role of Jun-shik, a young marathoner who just wants to get back home.
KCT: Watching the film, it looked like the shooting must have been an ordeal.What was it like?
Jang: Even when a shoot is strenuous, when I check out the monitor and see the camera on me, it gives me strength. (Laughs.) When they took full shots and I could hardly be seen, the energy would drain even more. I knew what I was getting myself into, but the hardest part about this film was fighting the cold. It was the worst when we were shooting the first battle scene. Later on, we wore thick military uniforms for real winter scenes, but at first we had to wear thin summer uniforms.
KCT: This is your second film with director Kang Je-gyu. (The first was 2004's "Taegukgi").
Jang: When I heard that director Kang was producing this film, I told him, "I'll do it if you direct". The trust I have in him came before the character or thefilm itself. It's good that he knows and is familiar with my strengths, but if you put it another way, the director might not find any of my ways of expression fresh. Director Kang Je-gyu and I kept in touch steadily after our previous film together and we have personal trust between us. But when we worked on "My Way" he felt like a completely different person on set.
KCT: Jun-shikclings on to his beliefs throughout the fire of World War II. Looking at the dynamics of his character, he could be seen as a rather unrealistic person.
Jang: It's difficult not to compare this film to "Taegukgi". While "Taegukgi" followed a storyline focused on brotherhood, "My Way" concentrates on these characters in this epochal situation of war. When we were shooting, I had a great urge to perform in a way that would stand out dramatically in the frame or scene and attract the attention of the audience. But Jun-shik is not the kind of character you can express that way. He isn't a character that creates situations, but one that reacts to them and requires that kind of acting. This was the exact opposite of my previous work, so it was really frustrating at first.
KCT: How did you overcome that frustration?
Jang: What's certain is that Jun-shik doesn't change. It's the characters around him who change because of him. In that sense, Jun-shik as a character has a clear goal. I think as an actor, it is matter of choice whether to play this kind of character or not. Even the title of the film is "My Way", isn't it? From a broader perspective of the film, Jun-shik is the most important character and is determined by necessity. My job was to figure out the details within that [set-up] and find ways to express them.
KCT: Your previous film and Hollywood debut "Warrior's Way" (2010) did not do as well asexpected. Do you see "My Way" as an opportunity to make up for it?
Jang: The thing is, with "Warrior's Way" the focus was not on debuting in Hollywood. Back when I did "The Promise", it wasn't my aim tolaunch into Chinaeither. Personally, I felt something lacking, but it was still worthwhile as it was a good experience.
KCT: You've practically become an icon of large-scale movies.
Jang: I hadn't planned on it, but I find that whenever a large-scalefilm is being planned I end up getting offered a part. I've refused some, while I couldn't participate in others even though I wanted to. But I feel a kind of sense of emptiness after completing eachlarge-scale film. So I end up looking for a film that's different afterwards. The reason why I did "The Coast Guard" [dir. Kim Ki-duk, 2002] was because I went out insearch of something different after finishing "2009 Lost Memories" [dir. Lee Si-myeong, 2002], and it's along the same lines that I was attracted to work with director Heo Jin-ho next movie "Dangerous Liaisons".
KCT: There's a concern that you are doing too many large-scale films in contrast to the more adventurous choices of your past.

Jang: To be honest, I didn't personally have any desire[to pursue this direction]. Roads kept going that way. Itwas never a roadI set for myself, but they kept opening up in front of me. There are people who want to walk this road but can't. I'm just there.Sometimes I went just because I was curious. So I may have seemed less eager and enthusiastic in some ways. Now I know that all those experiences have become a valuable part of me, and help me when choosing my next films. It's become more fun. There was a time when I felt confined. I've become freer now after my marriage and the birth of our child. I have more confidence that I can do what I really want to do.