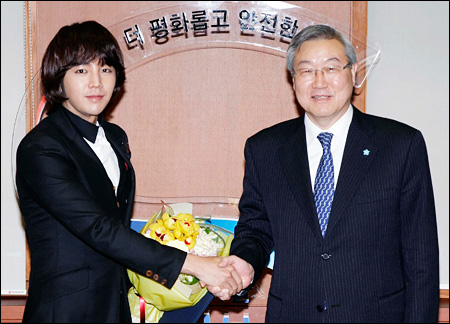 / Courtesy of the Ministry of Foreign Affairs and Trade

Actor Jang Keun-suk, left, shakes hands with Minister of Foreign Affairs and Trade Kim Sung-hwan during an event at the ministry in downtown Seoul, Wednesday, to name the 24-year-old celebrity as a PR ambassador for the second Nuclear Security Summit to be held on March 26 and 27 in the capital.

Actor Jang Keun-suk has been appointed as a PR ambassador for the world's largest forum on nuclear security to be held in Seoul in March, the Ministry of Foreign Affairs and Trade said Wednesday.

The 24-year-old celebrity, who jumped to stardom in Japan and China, will join a variety of campaigns to promote the second Nuclear Security Summit at home and abroad along with three other PR ambassadors ㅡ Singer Lena Park, better known here as Park Jung-hyun, and two child performers ㅡ Wang Suk-hyun and Jin Ji-hee.

"It's my honor to serve as a PR ambassador for the summit that will play a pivotal role in sustaining world peace", Jang said as he received a plaque from Minister of Foreign Affairs and Trade Kim Sung-hwan. "I will do my best to promote this internationally important event not only in Korea but also worldwide".

More than 50 heads of state and representatives of international organizations, including the United Nations, IAEA, Interpol and the European Union, will attend the Seoul summit March 26-27.

President Lee Myung-bak will preside over the main session where world leaders will share ideas to develop tangible and efficient measures against nuclear terrorism, according to the preparatory secretariat for the summit.

"Actor Jang named as PR ambassador for nuclear summit"
by HanCinema is licensed under a Creative Commons Attribution-Share Alike 3.0 Unported License.
Based on a work from this source