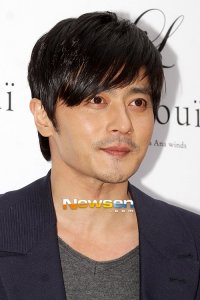 Hallyu star Jang Dong-gun has returned to a TV talk show for the first time in 10 years.

Known as a private actor with unparalleled popularity and respect among his fans and peers, Jang was the first guest of "The Park Joong-hoon Show, Sunday Night in South Korea", a new talk program on KBS.

On the show, hosted by acting veteran Park, Jang told personal and candid stories. "Looking back on my 37 years, I regret being too serious", he said.

The 37-year-old top actor said that he sometimes coveted the normal lives of others, but added he quickly found his own path to happiness and is grateful for it.

Asked about his long hiatus from films, dramas and TV shows, Jang, who was one of Park's closest friends, answered, "I personally feel uncomfortable when I am in crowded places. But for an actor, I think it's enough just to act", he said.

Jang also said that he'd worked on a new Hollywood film, "Laundry Warrior" ("The Warrior's Way") over the last three years. "People thought that my hiatus was too long but I have been working on the film for a long time", he said.

In the show, Jang mesmerized viewers by singing, "Rain and You" from the movie "Radio Star", in which Park starred.

After the show, viewers posted numerous responses. "It was a great chance to see his human side", one viewer said.

However, another said, "It didn't look spontaneous because it was the opening of the show. Also, it's a pity not to see other aspects of Jang, like his personal dreams and wishes and his plans as a goodwill ambassador of the World Food Program (WFP), as it narrowed on gossip, like his ideal girl", another viewer said.

Jang starred in "Taegukgi: Brotherhood of War" (2003) and "Typhoon" (2005) and recently played the role of a mysterious Asian warrior assassin who ends up in a sleepy, American Mid-Western town near a desert, where he struggles to find peace, contentment and even love in "Laundry Warrior" ("The Warrior's Way"). The movie will be released next year.

"Actor Jang Returns to Talk Show"
by HanCinema is licensed under a Creative Commons Attribution-Share Alike 3.0 Unported License.
Based on a work from this source