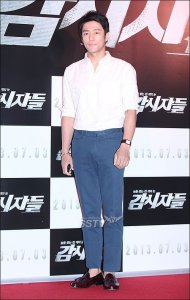 Actor Ji Jin-hee has renewed his contract with Korea Exchange Bank as a model for its ad campaigns for another year.

Sidus HQ, the actor's management agency, announced that Ji recently renewed his contract with KEB. The actor has been the face of KEB since 2004.

The actor has been delivering a message of hope by appearing in KEB ad campaigns with sports stars such as American football player Hines Ward and Korean soccer player Lee Young-pyo. A KEB official expressed hope that the actor will continue to portray his trustworthy and warm image to the public.

Ji recently starred in the popular MBC TV drama series "Spotlight" as a news reporter. He is currently preparing to publish a book on Italian wines entitled "Wine Story in Italy".