Actor Jung Hae-in to Meet Fans in Seoul Next Month 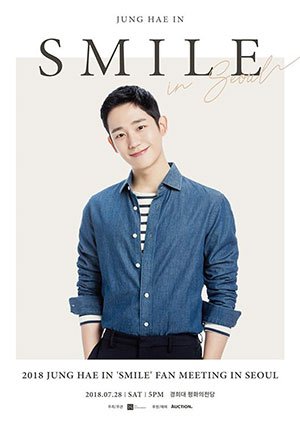 Actor Jung Hae-in will hold his first ever event to meet with fans in Korea next month, his agency FNC Entertainment said Friday.

The event will take place at Kyunghee University in Seoul on July 28 and be the last stop on his Asian tour, which includes Taiwan, Thailand, Hong Kong and the Philippines.

Jung has become a hot property after he starred in the JTBC TV series "Pretty Sister Who Buys Me Food", which concluded its 16-episode run last month. It was his first starring role, but he had gradually risen to stardom by having taken part in various projects, small and big, continuously since his debut in 2014.

"Actor Jung Hae-in to Meet Fans in Seoul Next Month"
by HanCinema is licensed under a Creative Commons Attribution-Share Alike 3.0 Unported License.
Based on a work from this source