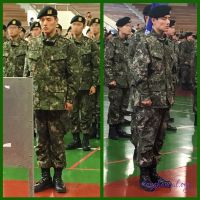 During the completion ceremony held in the morning of October 24th at the training center's indoor gymnasium, the actor who was designated as "platoon leader", led his fellow recruits as they marched in formation to the center of the gymnasium.

These brave young men underwent the gruelling and comprehensive training programme that included the 40km march (while carrying 23 kilos of gear), chemical, biological and radiological training, field training exercises, weapon drills and combat training, and other physically and mentally exhausting activities that transformed them from civilians to elite soldiers. These challenges were rewarded as they were promoted to the rank "private" during the ceremony. The soldiers will be deployed to their respective bases to complete the rest of their compulsory military conscription in the coming days.

Meanwhile, Kang Ha-neul will begin his 21 months of active duty service as military police at the Capital Defense Command. He will be part of the motorcycle (MC) unit, which is widely regarded as the face of the military police. The MC unit provides escort and security services for high ranking military personnel, VIPs, and dignitaries. The actor is foreseen to complete military service on June 10th, 2019.

Prior to enlistment, Kang Ha-neul concluded promotional activities, including fan meetings in Hong Kong and Singapore for hit action comedy film "Midnight Runners". He also completed filming "Forgotten", a mystery-thriller movie written and directed by acclaimed director Jang Hang-jun. The movie is due for release at the end of November 2017.

" Actor Kang Ha-neul completes basic military training"
by HanCinema is licensed under a Creative Commons Attribution-Share Alike 3.0 Unported License.
Based on a work from this source