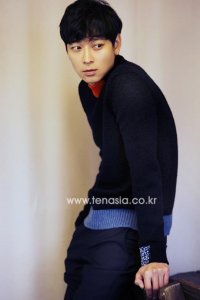 Actor Gang Dong-won is considering taking legal action against a Japanese travel agency for using his name and likeness to promote a tour package to Korea.

Japanese travel agency, Frau International ( Open the link ), has been promoting a tour package for Japanese fans to visit the location of Kang's upcoming film "M". The tour package involved a 3-day stay in Korea, a visit to the set of "M" and a photo-taking opportunity with Kang.

However, Frau International posted a message on its Web site, apologizing to Kang and saying it would cancel the two tour packages scheduled on March 1 and March 25.

A representative from Kang's management agency, The Men Entertainment, said the actor will decide whether or not to take legal action against the travel agency, after an internal meeting.

The representative from Kang's management agency said it learned of the tour package from one of Kang's fans.

Frau International had used photos of Kang to promote the tour packages, and even claimed it had the support of the Korea Tourism Organization. The travel agency has removed advertisements for the tour packages involving Kang.

Kang's agency said they were worried that Japanese fans were being misled by the travel agency into believing they would actually meet the actor during the tour. Attempts were made to contact Frau International, but did not get a response.

Kang is currently filming "M", directed by Lee Myung-se. In the film, Kang plays a best-selling author who writes about a Sad Love Story. Lee and Kang first worked together in the 2005 film "Duelist".

"Actor Kang to Sue Japanese Travel Agency"
by HanCinema is licensed under a Creative Commons Attribution-Share Alike 3.0 Unported License.
Based on a work from this source