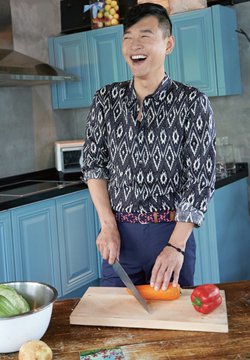 Like many of his compatriots, actor Kim Ho-jin loves heading to a Korean BBQ restaurant for some pork ribs or roast beef with salt. However, this confirmed meat lover has taken his love of food one step further, earning no less than seven certificates to become something of a master chef and jack of all culinary arts.

He is now licensed to cook Korean, Western, Japanese and Chinese food, run a confectionery and bakery, and cook and serve blowfish. The latter certificate is particularly hard to obtain, even for expert chefs, as blowfish can be poisonous if not prepared properly.

Kim opened a restaurant called Shaya 99 on Mt. Nam two years ago and later published a cookbook containing his own recipes. He is now hosting a show on MBC TV introducing good restaurants around the country.

"Our house was always overcrowded with relatives on special days when I was a kid. Things got quite boisterous with all the people preparing, cutting, frying and boiling ingredients", he recalled, explaining his nascent love of cooking. He said he tries to replicate this festive mood on red-letter days by shopping for groceries and spreading them out on his kitchen table so his daughter can grow up to cherish similar memories.

Kim said is careful to never overeat and always makes sure his meals maintain a good nutritional balance. He said that eating well and wisely, in this way, helps him stay healthy and fit without having to suffer painful diets -- something he always bears in mind when he cooks.

"Actor Kim Ho-jin Takes Leading Role as Culinary Wizard"
by HanCinema is licensed under a Creative Commons Attribution-Share Alike 3.0 Unported License.
Based on a work from this source