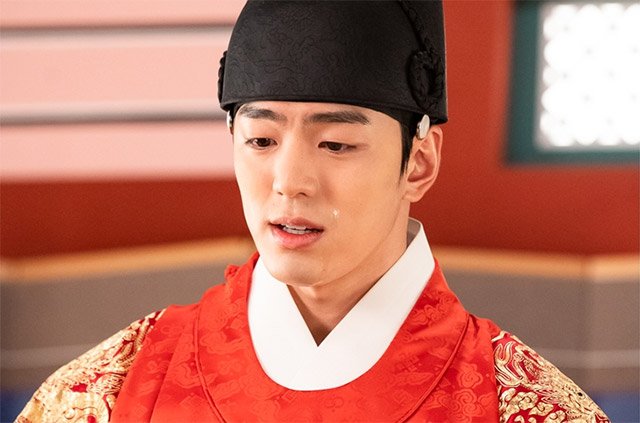 Actor Kim Min-kyu is rapidly becoming a heartthrob thanks to his role as a king in TV Chosun's series "Queen: Love and War".

Set in the Chosun Dynasty, the period drama depicts the conspiracies and palace intrigues that take place amid the selection of a new queen.

Kim has been capturing viewers' hearts with his portrait of a young king reminiscent of the charismatic one played by Kim Soo-hyun in the megahit series "The Sun and the Moon" in 2012, as well as the gentle monarch played by Park Bo-gum in another successful series, "Moonlight Drawn by Clouds" in 2016. Kim Soo-hyun and Park cemented their status as rising stars through those period dramas.

"Queen: Love and War" is the first period drama for Kim, who made his acting debut in 2013. It is a demanding role, requiring him to control his tone and breathing as he delivers his lines.

"During the first meeting, the director told me that I was better at things he'd not expected, but he was disappointed in things he'd anticipated [I would do well], such as evoking romantic feelings", Kim said.

However, as if to prove the director wrong, with the series now half over, Kim has increasingly made viewers' hearts flutter.

"My previous characters have been mostly teenagers or somewhat childish or immature. I hope to get more chances to bring out and show other sides of me", Kim said.

"Actor Kim Min-kyu Has Hearts Fluttering with Portrayal of King in Period Drama"
by HanCinema is licensed under a Creative Commons Attribution-Share Alike 3.0 Unported License.
Based on a work from this source