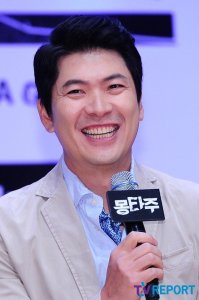 The 35-year-old actor is best known for his roles in hit films such as "Memories of Murder" and more recently, "May 18", a movie about the 1980 Gwangju Democracy Movement. He met Kim Eun-gyung, his wife-to-be, when he visited her dentistry in Gahoe-dong, Seoul in June.

"I knew she was the one when I first laid eyes on her", said Kim, according to Fantom Entertainment Group, Kim's agency.

After getting permission from their parents last week, the couple decided to marry in a wedding ceremony to be held at Walkerhill Hotel in Gwangjang-dong, Seoul, on Oct. 7. They will honeymoon in the Maldives.

Kim is scheduled to play the title role in the historical TV drama "The Great King Sejong" to air from next January on KBS.

"Actor Kim Sang-kyung to Wed"
by HanCinema is licensed under a Creative Commons Attribution-Share Alike 3.0 Unported License.
Based on a work from this source