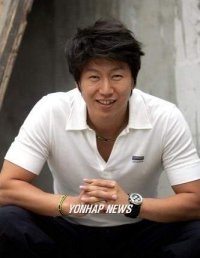 The zeal for English education in South Korea needs no introduction, except that it has inspired hit comedies like "My Tutor Friend" and "Please Teach Me English" (2003).

Funnyman Kim Soo-ro comes back to the big screen as E.T. ― no, not an extraterrestrial, but an English teacher ― or more specifically an unconventional, "alien-like" one in the upcoming film "Our School E.T" (working title).

The 38-year-old actor ("A Cruel Attendance ", 2006) plays the role of a quirky high school physical education teacher. But the school's new policy to boost English education puts his position at stake, and he decides that teaching English is his only hope. Thus begins the simpleton's rigorous training to exercise his brain "muscles" to master English.

Kim's anxious "survival" seems to extend off screen. "I made the film thinking it would be my last. If this doesn't fare well in the box office, then I won't be getting any more offers, so I poured my heart and soul into it", he said with a bout of his signature laughter at a press event in southern Seoul, Tuesday.

Director Park Gwang-choon ("She's on Duty", 2005) said the script was tailor made for Kim. In a previous press meeting, the actor said he had always wanted to play a teacher. It took him five years of retaking the college entrance exam for college, and his high school teacher's support was vital. He never forgets to visit his teacher to this day.

"They say English education is too focused on grammar here, and I think that perhaps education, or student-teacher relations in general, are grammar-oriented rather than conversational. My character in the film thus approaches students in a more realistic, conversing way", he said.

The director emphasized that the film is entertaining and funny, but is more than just an extension of TV slapstick sequences. "I wanted to catch two hares simultaneously, both comedy and drama", said the male lead, adding that the film offers meaningful humor rooted in a touching story.

Despite his solid reputation as a goofball, Kim also laughed about being hopelessly defeated by ad-lib master Lee Han-wi, who assumed the role of a P.E. teacher-turned-principal.

"Our School E.T" is due in theaters Sept. 11. Distributed by SK Telecom.

"Actor Kim Soo-ro as English Teacher on Big Screen"
by HanCinema is licensed under a Creative Commons Attribution-Share Alike 3.0 Unported License.
Based on a work from this source