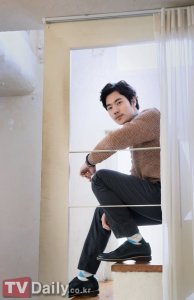 "Enjoy One's Calling" is the phrase written on actor Kim Kang-woo's cell phone. "Talented people cannot beat people who know how to enjoy life. I went through hard times when I first started acting. But one day, I realized I was doing something I wanted to do and earning money for it. The point is to take pleasure in what I do ― acting", Kim said in an interview with The Korea Times at a cafe in Samcheong-dong in Seoul, Monday.

Kim, 29, debuted through "The Coast Guard" (2002), directed by Kim Ki-duk, when he was a senior at Chung-Ang University. "The only role I could get without any acting experience was a soldier", said Kim.

He was then noticed when he played Mu-cheol in the MBC drama "Breathless - Drama" (2003) and starred in SBS's "Three Leafed Clover" (2005). Kim has been known as "Mr. Right" since then for the honest and diligent characters he played. "It's funny. I didn't know that I had that kind of sincere image in me", he said.

Kim also appeared in the films "The Aggressives" (2005) and "The Beast and the Beauty" (2005), but popularity was still elusive. Though he cranked up his last movie in spring, he had to wait longer than usual for the movie's release. In 2007, Kim's three movies were released consecutively. "The Railroad" received favorable reviews but failed to draw a large audience.

Fortune, at last, smiled on him. "Le Grand Chef", a film remake of a popular cartoon, became the biggest hit of the second half of 2007. It drew an audience of more than 3 million and Kim shot to instant stardom.

Moreover, he won the Best Actor award for his role in "The Railroad" at the 25th Turin Film Festival in Italy on Dec. 1. "I went to Turin as if I were just backpacking with director Park Heung-shik". However, he won the award, beating out 14 other actors. "Of course I was excited to received the award. But I was also scared how this was going to affect my career", Kim said. "I won't act much better all of a sudden because of the prize. However, people will anticipate better performances, and I have to live up to those expectations".

Now, Kim is waiting for the release of mystery thriller "Rainbow Eyes", which is to be released Thursday. Directed by Yang Yoon-ho, "Mask" chases a serial killer related to an assault case in the army 10 years earlier. Kim plays the role of Jo Gyeong-yun, a tough detective. "Detective Jo has a complex personality. He hides his gentle side and homosexuality and instead emphasizes a macho character. I focused on expressing the contrast of his two sides", explained Kim. "Seong-chan (the lead character of `Le Grand Chef') was another solid and decent character I played. I wanted to break out of that image and that's one of the reasons I chose this movie".

"Before shooting `Rainbow Eyes', I was an ordinary, conservative Korean man who was not well-informed and ambivalent about homosexuality. To get to know more, I met transsexuals and talked with them. I now know that it is just their destiny, not a choice they made", Kim spoke frankly about the homophobia described in the movie.

Kim has not decided what his next project will be, but left the possibilities open. "I don't have any specific characters that I want to play. I am still young and I will just do my best in whatever role that comes to me, whether it is a protagonist or villain in any genre.

"I want to be on stage someday. Plays require much time for rehearsals and the reaction from the audience is immediate. However, if I wait too long, I might not be able to do it, so I'll go for it anyway", Kim said.

While every other actor tries to bolster his or her individuality, this actor is a rather reserved character. "I am not a very charismatic person with a unique personality. Rather, I want people to remember the characters I portrayed, not me", he said. "I think it's better to be a little flexible as an actor since I don't know what kind of person I will have to represent".

Kim secretly visited movie theaters to check what the audience thought about the movie. "When I saw audiences smiling after the movie ("Le Grand Chef"), my heart felt full because I did something meaningful for them".