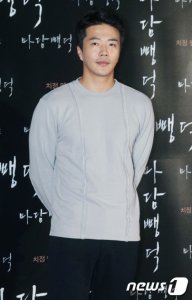 Actor kwon Sang-woo said in a lawsuit filed to a local court Monday that he was blackmailed by a mobster, changing his court testimony made seven months ago.

He sued Yuri International, his former agency, for not paying him his proper salary and asked the company to compensate him 1.8 billion won. He said his former agent ignored his being threatened by Kim Tae-chon, former boss of the Kwangju-based Seobangpa crime family. Kwon also said he asked the company several times to change his agent, but it refused to do so.

Kwon gained stardom for his role in SBS hit drama " Stairway to Heaven" in 2004. He is one of the highest paid actors in the Korean entertainment industry and has a strong fan base in other Asian countries, particularly Japan.

In February, the rugged looking actor shocked fans when he revealed having been blackmailed by the mobster trying to force him into attending a promotional event in Tokyo organized by a Japanese friend. According to voice recordings made from his home phone released by prosecutors, Kim warned Kwon that he would come to his house and make a "bloody" scene.

However, a few days later at the trial, Kwon settled the case saying he had a few misunderstanding with the former crime boss, who has described himself as a born-again Christian since being released from prison in 2004. The actor denied having been threatened.

Neither Yuri International or Kwon accepted any media's request for an explanation.

"Actor Kwon Alleges Blackmail by Gangster"
by HanCinema is licensed under a Creative Commons Attribution-Share Alike 3.0 Unported License.
Based on a work from this source