Actor Lee Byung-hun Says Best Is Yet to Come 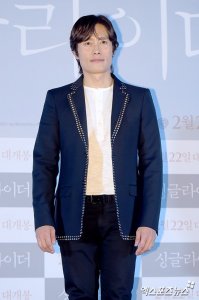 "I can't tell whether having appeared in just one Hollywood film is success or failure", says actor Lee Byung-hun of his Hollywood debut in the movie "G.I. Joe". "The journey is just beginning and I'm still trying. I think of it as having taken a step forward". Playing the part of Storm Shadow in the action blockbuster was worrying, Lee says, because the character is a comic book exaggeration far removed from reality.

"G.I. Joe" was yet another experience in foreign moviemaking for the Korean actor, who also appeared in the French film "I Come with the Rain". While at the Cannes International Film Festival last year with the movie "The Good, the Bad, the Weird", Lee glimpsed Clint Eastwood at a nearby table in a hotel restaurant. He wanted to say hello, but fearing that he might be taken for a crazed fan he settled on having his picture taken with Eastwood in the background. "I want to become a great actor like him that other actors want to take a picture of in the background", Lee says.
Lee Byung-hun /Courtesy of BH Entertainment Lee Byung-hun /Courtesy of BH Entertainment

That goal may have already come to fruition. With a career spanning nearly 20 years, Lee has a long filmography on his resume and fame matched by only a few. With his popularity has come an unprecedented level of pressure. As one of the major stars of the Korean Wave, Lee's fame in Japan is so great that he can't walk on the streets without at least 10 bodyguards. Japanese fans are very passionate -- some tearful admirers once surprised Lee outside his hotel, their hands full of gifts, early one rainy morning.

Despite his status, Lee has a pessimistic view of the Korean Wave. "There is a bubble in the Korean Wave because of an oversupply of inferior content", he says. "A large number of Asian fans enjoyed the sad, melodramatic romances from Korea, so a lot of producers and investors made films and soap operas with similar story lines". And that has resulted in negative side-effects, he says.

As for his chosen profession, Lee says that actors are people who enjoy having multiple personalities. "Their job is to dig up those personalities from within themselves one by one, and maximize that one aspect each time". But Lee says he is rarely satisfied with his performances, and he has not made his best film yet. "I'm sorry for the directors that I've worked with thus far, but I want that best film to come soon, and want to repeat that experience many times in my career".