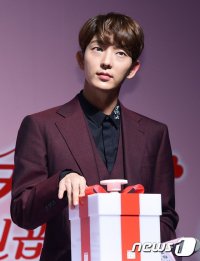 Actor-turned-singer Lee Joon-gi is making a return to center stage in Japan with concerts in Kobe and Yokohama on July 18 and 19. The event will commemorate the re-opening of his fan club, Splendor.

Lee previously recorded and released music in 2006, but his new single in April was his first time back on the music scene. Another EP is due later this year and the undying love of his fans has thrust him back into the public eye.

The 27-year-old gained widespread fame for his role as an androgynous court jester in the film "The King and the Clown".

Although he has appeared in numerous films, TV dramas and commercials since his surge in popularity, Lee's subsequent endeavors failed to garner as much acclaim in Korea as his original role.

Lee continues to have large fan bases in other Asian countries, contributing to a wave of cultural exchange called "hallyu", the term used to describe the welcome of Korean pop culture in Japan, China and others countries. He was the representative for last year's Seoul Hallyu Festival.

In an interview with HanCinema, an online database for Korean movies and dramas, the actor discussed his motivation to satisfy the fans.

"Being a public figure, there aren't many ways for me to relieve stress. And, over the years, I've lost some of the people in my life", he said. "In that sense, I just want to have fun with my fans. My fans mean a lot to me".

Lee has recently held fan appreciation concerts in Shanghai and Hangzhou in China, where there were 10,000 in attendance. Tickets for the Japanese concerts ― where fans will get the only opportunity to buy a special edition DVD of his upcoming EP, J Style ― have already sold out.

The SBS drama "Iljimae" (a mysterious, black-swathed thief who robs from corrupt government officials and gives to the poor) will be broadcast for its third run on Japanese television starting August 25 on Korean entertainment satellite channel Mnet. Beginning Aug. 1, the channel will also air "Time Between Dog and Wolf - Drama", a thriller drama, and "Episode 2: The Mask", which recorded an international fan's meeting with Lee In Seoul last April.