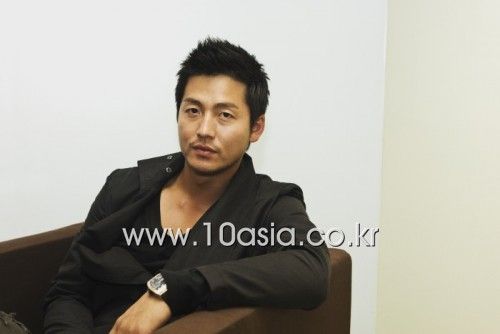 "I am actor Lee Jung-jin and I'm still best-known for 2004 film 'Once Upon A Time In Highschool'", said the actor at the press conference for his new film "Troubleshooter" that premiered in September. It is not that he did not star in other films during the past six years. In film "Mapado" (2005) he evoked laughter by appearing in embarrassing 'mompe' pants (loose-fitting attire usually worn by old woman) and practically betraying his former career as a model and in MBC drama "9 End 2 Outs" (2007)" he offered his viewers with a different form of fun by playing a character full of twists called Byun Hyung-tae who looks like a perfectly charming guy only on the surface. And although he acted like a loser in the drama, writing down all the misdeeds his girlfriend makes and even fighting with her physically if necessary, he was still able to win women's hearts by being there when his girlfriend needed him the most. Nonetheless, it is the 2004 film "Once Upon A Time In Highschool" that stands as the most important character to refer to when describing actor Lee. Nothing could stop his character, the charismatic Woo-sik, who could scare off his opponents with just a few words. And he was the same when he had to leave school after losing in a fight against his rival or falling in love, knowing no hesitation. Just like Eun-joo (Han Ga-in) had chosen Woo-sik over the gentle, exemplary student Hyun-soo (kwon Sang-woo), it is this captivating aura that made Lee unforgettable to the audience.

But Lee is no longer the immature bully at Chungmun High School who looked out on the world through the school cap perched askew on his head. Just like the Woo-shik who flaunted his dignity as being the highest of status in his class by donning flared pants, Lee continued to look superb in his recent film "Troubleshooter". However this new character Pil-ho who wears a mask of kindness and gives orders conveniently through the phone is an entirely different character from his character who was in high school. He is also an interesting villain in the sense that he tries to attain his goal while maintaining a gentle facade. "People have high expectations due to the superb acting they have seen in Hollywood films and American TV series. There is also a large variety of villainous characters that have been produced. I believe when it comes to truly strong characters, most of them have already been played. So I considered doing something different with my villain, a character that is nicer, kinder and more restrained".

Lee himself is a big movie buff who has accumulated over 1,300 DVDs in his house. He likes to learn how films are made through DVD supplements and receives autographs from his favorite director or actor for the keeps. Here are some of the movies he has enjoyed for a long time.

1. "Infernal Affairs"
2002│Andrew Lau & Alan Mak
"The force of aura exuded by Andy Lau in his suit was fantastic. He looked stunning despite his age and to see Tony Leung's acting on top of that! The movie was also re-made into Hollywood film "The Departed" starring some of the hottest Hollywood actors and directed by Martin Scorsese. Hollywood may exceed in scale but I still think Tony Leung's acting, speaking volumes with his dark eyes, was much better", said Lee.

Andy Lau and Tony Leung alone make it worthwhile to watch "Infernal Affairs". Chan Wing-Yan (Andy Lau) a perfect police officer who could drink gracefully even from plastic bottle and Lau Kin-Ming (Tony Leung) a member of the Triad Society Gang who always fears his secret identity becoming exposed, are actually both undercover agents planted by rival organizations. As the plot thickens everything changes for both the gang member disguised as a cop and the cop disguised as a gang member.

2. "The Notebook"
2004│Nick Cassavetes
"You didn't think I would watch sentimental movies? I watch them frequently and I'm also a fan of many humane stories like 'August Rush (2007)'. I watched 'The Notebook' many times. Of course I cried a lot too (laugh). Two people not being able to forget about each other till they die... Isn't that sad?"

Most people say that first love is beautiful because it usually does not last. In return we receive a flawless, everlasting memory of that moment. But here is a man who continued to love one woman till the end, whether she remembers him or not. The movie attacks viewers tear ducts effectively through its story of pure and noble love.

3. "Flash Point"
2007│Wilson Yip
"I have been going through lots of action films lately hoping it would help with my acting in KBS drama 'The Fugitive Plan B' which is my most recent project. 'Flash Point', and other Hong Kong films including 'Invisible Target (2007)' and 'SPL (2005)' are movies that have left strong impressions. I had watched it before as well but by playing a cop in 'Fugitive' in places such as Macao and China, I was able to relate to the characters more. Oh, I also got an autograph from Donnie Yen on my 'Flash Point' DVD, too (laugh)".

The film instilled vitality into the movie scene in Hong Kong which had been in a slump for some time. As a typical Hong Kong action film that follows the success formula of all films, "Flash Point" was basically a story about a righteous cop punishing evil gang brothers. What makes the film special is the charm of Donnie Yen, a top action star, alongside Jackie Chan and Stephen Chow.

4. "On Golden Pond"
1981│Mark Rydell
"First of all, I love the packaging of the DVD (laugh). The movie is a classic family drama that looks into the disputes between a father and his child. The film portrays how a father who used to be high and mighty in his prime and a daughter who is irritated by her father because he continues to be stubborn despite growing older, learn to understand each other. There may be nothing new to this but I really liked the story".

The relationship between father and a daughter may be as tricky as that of father and a son -- especially for daughter Chelsea (Jane Fonda) whose fear of her father in her early years turned into hostility. But with time, the two come to understand each other as individuals. Henry and Jane Fonda, who are father and daughter in real life, played the roles which won them best actor and actress awards at the 54th Academy Awards.

5".The Patriot"
2000│Roland Emmerich
"When it comes to Mel Gibson, most people usually mention 'Brave Heart (1995)' that won him the most awards and received the most attention for but I much prefer 'The Patriot'. He looked coolest in that film, too. He vowed never to fight but when his children's lives were put in danger he takes out an axe. It was great fatherly love that he showed".

Sometimes an act to protect your family can be nobler than indulging yourself in a great cause, like in case of Benjamin (Mel Gibson). It was neither the revolution nor the honor that fueled the fearless hero but father's love. The film also stars the young Heath Ledger who appears as Benjamin's son.

"Actor Lee Jung-jin's Movie Picks "
by HanCinema is licensed under a Creative Commons Attribution-Share Alike 3.0 Unported License.
Based on a work from this source