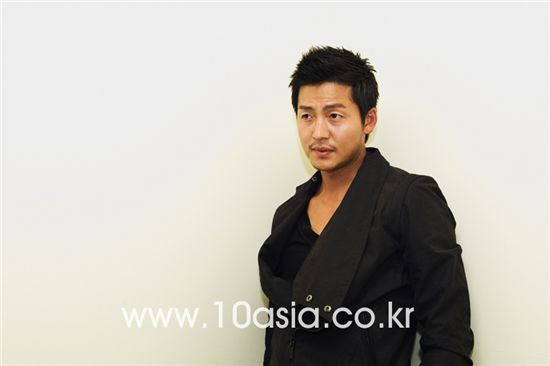 "You might end up kissing your acting career good bye". This is what veteran comedian Lee Kyung-kyu said to actor Lee Jung-jin when he first appeared on KBS variety show "Happy Sunday" in March 2009. At the time he was being admitted as one of the regular members of the show's segment "What Makes a Man" and it was a joke thrown to Lee who would be the youngest among the crew fit to be called a middle-aged men's club but not completely groundless given his position at the time. It was true that Lee belonged in the heartthrob category, good looking enough to star as a hero in the MBC drama "I Love You, Don't Cry" (2009) but at the same time still lacking in presence outside the screen. His joining the variety program also posed risk to weakening the weak presence he had at the time. But after a year and a half we all know that it was all unnecessary concern.

Lee's acting career continued to roll on, this year starring in films "Troubleshooter" and "No Doubt" and action-packed KBS drama "The Fugitive Plan B". He is now also a certified entertainer in that very variety show. But this is not just to show that he has an active career. Lee proved his worth outside the screen when he wholeheartedly helped his senior colleagues climb up the rough paths of Mt. Jiri. He also constantly left his mark in every role he played. As Pil-ho in "Troubleshooter", he displayed a restrained charisma in contrast to the wayward Tae-shik (Sol Kyung-gu) and as Do-soo in "The Fugitive Plan B" he showed off his manly appeal which stood out amongst Ji-woo (Rain), the subtle private detective and Kai (Daniel Henney), the ambitious businessman. And the strong impression he has left from playing such roles have added to proving his capacity as an actor. In other words, the public has become increasingly aware of him, both inside and outside the screen. Just like the songs Lee described below as "echoing" in his ears. They may help us gain an even stronger impression of him.

1. Suh Young-eun's "With" (Single)
Suh Young-eun is one of the true singers out there and I love most of her songs. "These Damn Words (Feat. Jung Yeop of Brown Eyed Soul)", that so well expresses the regret felt over a love after the breakup, is the song I listen to the most these days. Interesting title too". The absence of mesmerizing dance steps and stage costumes does not automatically make one a true singer. But it is also true there is a certain aura for bold singers who try to push ahead only with his or her singing. Just like Suh Young-eun and Jung Yeop. The two vocalist in Suh's single "With (Single)" shows the perfect harmony of male and female vocalist by restraining their singing tones. Rather than showing off their high tones and other powerful techniques they focus on expressing the sorrow of the song through lyrics that "repeat words of love till it wears out".

2. Lee Moon-sae's "When Love Passes (4th Album)
You can't leave this album out when enjoying autumn. Lee's second recommendation was "When Autumn Comes". "I seem to hear this everywhere I go so I end up humming it to myself. It seems to come out most frequently when I'm listening to the radio in the car. The weather has turned cold but it still feels like autumn thanks to this song", said Lee. He finds COOL's song attractive in the summer and when raining in November, Guns n' Roses' "November Rain". So when a cold and clear wind greets him, it is time to listen to Lee's music. Perhaps it is a waste of breath to talk about the warmth of the song. Just like Lee put it, even though spring and autumn are getting shorter these days, seasons continue to exist through our sentiments toward the outside world. Just like enjoying the song "When Autumn Comes" as it is.

3. Son Ga-in's "step 2/4 (EP)"
It was not hard to guess which number Lee was going to recommend when he said he was glad to see its title identical to one of the recent films he starred in - "Irreversible". (English title: "No Doubt). "I saw that the song took the No.1 spot in some music program. Son Ga-in's songs are good as always. I wish my film could be loved as much". Do not take Lee's words wrong because he is not saying that just to promote his movie. Singer Son Ga-in's "Irreversible" is a good tango number. Given Son Ga-in's previous images in the music band Brown Eyed Girls or in Narsha's music video for "Piri Papa", not many could have guessed this is how Son Ga-in would start out as a solo singer. Especially through her collaboration with Yun Sang that showed the most sophisticated synthetic pop in Korea. However what resulted after cooperation between Son Ga-in, Yun Sang and Lee Min-soo who wrote lyrics for "Abracadabra" was a tango. Not just a mere taste of it but real tango rhythm and instruments, giving birth to another unforgettable piece.

4. WINTERPLAY's "Choco Snow Ball (1st Album)"
The sweet and mellow sound of jazz accompanied by vocalist Hye-won's adhesive but not as exaggerated voice creates a truly enchanting song. "It's bossa nova style music that makes you increasingly addicted. It the perfect song for a grey winter day when you're meeting with friends for a light tea and a snack". The good thing about Winterplay is that although its music is based on jazz, the group does not limit itself to the genre itself and instead tries to create music that is enjoyable to others. For those who do not get it, try listening to "Melon Man" first.

5. Various Artists' "Cinema Paradiso"
"Even people who have never seen the movie will have heard of this song at least once", said Lee. The last song he recommended was "Love Theme" to one of the soundtracks for "Cinema Paradiso". Truth be told, practically all the songs in this soundtrack can move people's heart, including its theme music of the same name, "Childhood And Manhood", that came out during Toto's childhood moments. Even so, nothing can top the "Love Theme" which is probably the first track that springs to people's mind whenever the movie is mentioned. "The music was played at the ending scene as Toto who became a middle-aged man watches the ending scenes of the films that Alfredo has left him. Even I, who likes to maximize the effect of the final scene, was truly impressed. This is a wonderful piece that does an excellent job of relieving every detail of the movie's ending", said Lee. Just like Lee said sometimes short themes to movie soundtracks, just like madeleine cookies in the film "Time Regained", take us back to the moments when we first watched the film. Such magical moments are rare however. That is what makes "Love Theme" so magnificent.

"Actor Lee Jung-jin's Song Picks "
by HanCinema is licensed under a Creative Commons Attribution-Share Alike 3.0 Unported License.
Based on a work from this source