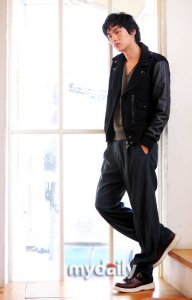 Actor Lee Min-ki of "Haeundae" and "A Million" is trying out for a singing career. In a recent interview with the fashion magazine Numero Uno, Lee revealed that he had officially released an album titled "! No Kidding". His debut album garnered a lot of attention from music industry insiders, because a number of famous foreign producers, including Kid Loco, Popular Computer, and One Two, took part in the album-making process.

As if to quell any criticism that he's trying to cash in on his fame earned after starring in this summer's mega blockbuster "Haeundae", Lee said that he's very serious about starting a new! career as a musician and the album is not a one-time event. He admits that his singing skills lack the power and soulfulness of professional musicians, but he wanted to communicate his feelings with sincerity and innocence. He added that he wants people to think of his voice as just one of the instruments in the orchestra.