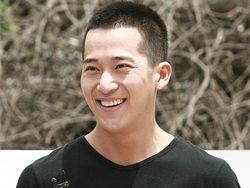 Young actor Lee Wan has entered a new chapter of his life. On July 12th, the star greeted fans and reporters before his 1 PM entry into his mandatory military service at the Non-san military training facility in South Chungcheong province.

Giving a proud salute, the actor said, "I know it must be surprising for you all to have heard my abrupt news of entering the army. I'm sorry for that and promise to greet you all after my mandatory service with a great new project.?About 100 fans showed up in support of him, waiting since before noon. As the clock ticked closer to him having to leave them for about two years, many of them started to cry as well. In a symbolic gesture, some of the fans released yellow balloons into the sky.

You may recognize Lee Wan from popular dramas such as his debut project "Stairway to Heaven", "In-soon is Pretty", and "Swallow the Sun". A notable film project was "Once Upon a Time in Seoul". He isn't only known for his acting, but also as being the brother of one of the hottest faces in Korea's entertainment industry: Kim Tae-hee. He expressed his concern in leaving his mother behind as he is the only son in the family.

Lee will receive the five weeks of military training before being placed into a sector of the military for the next 20 months.